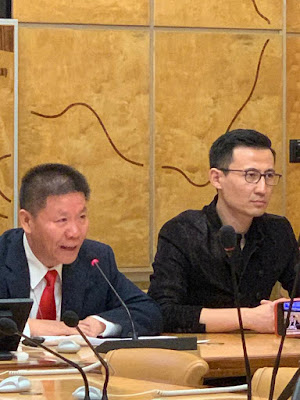 This took place during a virtual roundtable event for the Religious Liberty Partnership (RLP) on June 9. The main purpose of the roundtable was to discuss how COVID-19 has impacted China’s religious communities.

In his speech, Fu discussed how COVID-19 introduced a new form of virtual persecution for Christians. As the nation banned gatherings, churches decided to hold services online. However, more than 1 million officers were designated to monitor digital activities, including “illegal religious activities.” This resulted in Christians being taken into custody for holding online gatherings. Even virtual prayer meetings were banned.

Fu said Dr. Li Wenliang, one of the first COVID-19 whistleblowers, was a Christian. Li first noticed the virus turning up in multiple patients and believed it to be a resurgence of SARS, another coronavirus that swept China in 2003. He reported it to local officials but was ordered to keep silent. Weeks later, Li died of the virus, only days after he was declared ill.

Fu also mentioned China’s crackdown on Christian charitable work. In the past, Chinese officials allowed Christian missionaries to come into the country if their work contributed to the well-being of society. Now, officials have begun restricting such work, even forcing Christian-run orphanages to close.

In addition, a church in Wuhan, where the virus first made its appearance, had more than $5 million worth of medical equipment confiscated. This included PPE and face masks, which the church was distributing to those in need.
ChinaAid exposes abuses in order to stand in solidarity with the persecuted and promote religious freedom, human rights, and rule of law. If you wish to partner with us in helping those persecuted by the Chinese government, please click the button below to make a charitable donation.