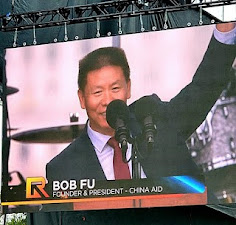 Dr. Xiqiu [Bob] Fu, President of ChinaAid, prays for China on the Global Day of Prayer.
(Photo: Video Screenshot from “The Return” event)

(Washington, D.C., October 10, 2020) On September 26, 2020, Dr. Xiqiu [Bob] Fu, the founder and president of ChinaAid, prayed publicly at the National Mall, asking God to make members of the Chinese Communist Party (CCP) repent. As Dr. Fu declared to thousands of people gathering there—that Washington, D.C. is the “center” of a spiritual war, he asked God to transform China into a country full of “missions.”

Instead of giving up his time to pray because of the CCP’s harassment, Dr. Fu led the participants of the meeting in praying, “Dear God, You rise a nation up or destroy a nation for Your own purpose. Over the past 70 years, oh Lord, You have repeatedly revealed Yourself to those whom communism and socialism have cruelly persecuted.”

Dr. Fu asked God that as Christians continue to suffer severe harassment in the hands of the CCP, He would revive His kingdom through the trying, sufferings, and persecutions.

In addition to standing with the persecuted, ChinaAid, an international human rights organization, exposes religious persecution by the CCP, and promotes religious freedom for all.

Dr. Fu, born and raised in China, a student leader in the 1989 Tiananmen Square protests, converted to Christianity while in China. During this time, he worked in a government job during the day led house church services at night. When authorities discovered Dr. Fu’s ministry, they imprisoned him and Heidi. With help from then President Clinton, Dr. Xiqiu Fu exiled to the US.

Although the CCP demonstrated animosity for Dr. Fu in the past, they have not threatened him so blatantly as now. Rarely do foreign citizens so openly threaten American citizens in the United States.

We urge the US federal government to employ effective measures to protect Dr. Xiqiu [Bob] Fu and his family, to bring those who try to harm them to justice, and to punish them according to the law.

As our government officials fulfil their duties to protect Dr. Fu, let’s pray for them and other brave souls who stand for and promote freedom of religion for all. May we also pray as Dr. Fu prays from his heart, that God transform China [as well as America and other countries throughout the world] into countries full of His [God’s] “missions”