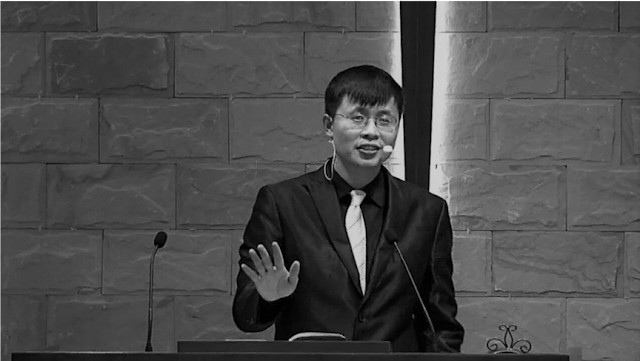 ChinaAid note: This is the final part of an article written by ChinaAid correspondent Yu Ren concerning the persecution of Early Rain Covenant Church.

Elder Su Bingsen, the principal of the Early Rain Covenant Church school, dean of Huaxi College of Humanities, and the promoter of Christian classical education, appears to be the most scholarly brother in the church. One might easily associate Bingsen, a thin, quiet and soft-spoken man, with a weak scholar. However, if one listens to his lectures or reads his articles, they will change this view. At the preparatory meeting for the Early Rain Covenant Church school in 2012, when the necessity for Christian education surfaced, Bingsen warned Christian parents who felt comfortable enough to send their children to secular public schools, saying, “How long will you bully your children and their souls in the frightening reality created by the modern state? How long will you permit the state, together with you, to use power and taxes and the established life and arrangement of education order to control your children? No matter how strong the country may be nor how realistic the created life may appear, what right does the state have to shape the soul? Can the state take on the meaning of life and the question of whether or not to commit suicide?”

The Chinese church community highly regards the education of Early Rain Covenant Church. The Church hosts seminaries and manages the humanities colleges and missionary schools. The school of humanities has also opened a number of high-level humanities courses to the community, bringing up many Christians and worshippers. In addition to Wang Yi and Li Yingqiang, Su Bingsen works as one of the initiators and promoters of this project.

For more than 10 years, Su Bingsen, born in 1982 in Anxi, Fujian Province (known as the tea capital), has lived in Chengdu, where he progressed from university to master’s degree to a doctor of Philosophy. From reading certain books, especially Liu Xiaofeng’s Salvation and Liberty, he began to compare the Chinese culture with Western cultures and eliminate the misunderstanding of religion. At that time, he met his girlfriend (now his wife). His autistic character, however, made it difficult for him to communicate with her. Bingsen, baptized in 2006, asked his girlfriend to attend church with him. In time, they married.

After Bingsen obtained his master’s and doctor’s degree at Sichuan University, he was sent to Hong Kong as a visiting scholar. atHong Kong’s Regent College, he came into contact with the traditions of Puritans and reformers, which made him aware of a previously neglected issue: the real change of Christian life by God that took place in the church. At that time, he noticed that God was bringing Pastor Wang Yi and other intellectuals who have a strong sense of the church up in Chengdu., In 2011, Bingsen and his wife moved to Early Rain Covenant Church. Soon after the transfer, Pastor Wang Yi pushed Biingsen to serve. Pastor Yi said, “You can’t expect to behave according to China’s concept of sanctification; that is, you go to the mountains to practice for a period of time and come down to work only after you are full of power and energy. The true sanctification of Christians involves the process of serving and tempering; dealing with life and changing little by little. Your service in the church correlates with your theological thinking.”

Su Bingsen began to participate in the children’s Sunday School’s service as a volunteer. Once, he read Martin Luther’s words, “I’m afraid that school will prove to be the gateway to hell unless they explain the Bible attentively, so that the truth in the Bible will be engraved in the hearts of young people.” Shocked by this sentence, Bingsen began to realize the seriousness of education. When observing the education concept held by Christians around him, Bingsen found that they had no problem in recognizing and respecting the authority of the Bible. When it comes to children’s education, however, what we think and do is still bound by the secular education concept. For nearly half a century, Rousseau’s educational philosophy, Dewey’s atheist humanistic educational ideas, and the utilitarian educational ideas have shrouded the education of the whole world.

The situation in China causes one to question, “What is the essence of education?” The priests and elders unanimously agree with the Bible’s “education charter” Deuteronomy 6:6-9, “These commandments that I give you today are to be on your hearts. Impress them on your children. Talk about them when you sit at home and when you walk along the road, when you lie down and when you get up. Tie them as symbols on your hands and bind them on your foreheads. Write them on the doorframes of your houses and on your gates.”

“Education is religious in nature,” Wang Yi wrote in an article on Christian education. “This is why the constitution of the Communist Party of China stipulates that ‘religion must be separated from education’ because Communism is a religion itself. The purpose of public education is to establish this religion and to work to turn our descendants into worshippers of this religion.”

The government’s and the church’s intentions to fight for the right to education can also be seen in the Dec. 9 arrests. At approximately 4:00 a.m., two women from the education department knocked on Su Bingsen’s door, asked about the children’s educational situation, registered the children’s names and ages, and then explained the compulsory education law to him and Xu Miaozhuang, his wife. The women warned them that they would take the two older children to the affiliated primary school of the Electronics University and that the state should enforce its compulsory education law. Miaozhuang replied, “You have already conveyed this message. We won’t go. Arrest us.”

As education involves a battle for soul, Early Rain Covenant Church decided to manage its own educational system.

In 2012, members called upon several qualified teachers with experience in faith, life, humanities, and education. These teachers resigned from different schools, institutions, and companies to become full-time Christian educators. Serving as the principal of the church school in preparation, Su Bingsen later became the elder of the church.

At the preparatory meeting of the covenant school, Bingsen said, “As Christians, we know that only God gives us the things about the soul and education. The Holy Spirit sets up such things as well as preaching, shepherding, and teaching, which is only given to the church, priests, and teachers.”

In the spring of 2013, Bingsen led Christian educators to initially set up a preschool class of the “Covenant Restoration School.” During the fall, they officially set up a primary school class and junior high school class, and then later founded the Huaxi College of Humanities. Bingsen also successively undertook the subjects of the classics, Latin, classical education, and the history of Western philosophy. In the first class of each school year, Pastor Wang Yi said to students, “Because 80% of what Chinese history and political lessons in middle school teach you are rubbish and lies, my main purpose is to clean up the dung and lies you have been taught during your middle and primary school studies.”

In one interview, Bingsen talked about some changes Christian classical education has brought to the students of Christian schools:

“Before coming to school, some students seldom or no longer attended church. After coming to the school, however, students who previously denied God in their original shallow consciousness, through real communication, thinking, and debate, are at least realizing no full reason exists for some claims that there is no God. Some parents have told me that their children had changed their thinking in this realm.

One student in a junior high school, after being touched when she heard a hymn, asked to talk with the pastor, hoping to start receiving communion. As a member who did not receive the Lord’s supper, beginning to receive holy communion represents a significant change in her belief.

In dealing with students’ problems, we find that the classic teachings have laid a good foundation for solving problems. For example, in answer to ‘How to solve a conflict between one student and some other students?’ our teaching proves extremely relevant to these problems. I will let the students think about the communication between them. ‘Aren’t you learning these things?’ I ask. You can think about the right way to deal with communication problems and consider procedures that should be implemented.

You will find that because we lacked experience in dealing with public affairs, in the beginning, many conflicts arioe in communicating with students. However, in accordance with appropriate procedures, with real learning and humility, conflicts and problems have become opportunities for growth.”

Initially, Su Bingsen did not know exactly what it meant to join Early Rain Covenant Church. In 2012, Pastor Wang Yi first called him to the streets to distribute an anti-abortion Gospel sheet at the gate of the Liren Women’s Hospital. During this time, several security guards scolded and pushed Su Bingsen as well as roughly seized and robbed him of the sheets he had been passing out. Later, when sharing his feelings, Bingsen said that this was the first time that he had been treated as a person with no status or dignity in the street. This event touched him deeply, because in the past, his thoughts and beliefs swayed from school to school. As a wise man, he experienced such a real faith in the street for the first time. On that day, Pastor Yi encouraged other Christians, “Give yourself a chance to be humiliated, to be disrespected in front of the world, and to be with that suffering Christ.”

In a sharing session last fall, Bingsen talked about an experience in May. “Before May 12, we had a meeting at a brother’s house in the earthquake-stricken area. The brother risked much receive us. Later, the State Administration of Religious Affairs [SARA] and the police arrived. Some people criticized us for exposing others the moment we went. At the beginning, authorities appeared hostile. Pastor Wang calmly talked with them. We also talked peacefully with some remaining cadres about their faith. Afterwards, they asked us for a Bible. The brother who received us said, ‘I was surprised when I saw this scene. If this had not happened, he never thought that it possible for officials of SARA to have access to the Bible. Whether they later believe the Word or not, at least they made this move (asking for a Bible). Because of their limited resources, we sent him a Bible by mail. This experience strengthened the brother.

Some people think of this type situation—the situation of government persecution—as strange, such as the meeting of extreme petitioners. If we are trained in the Gospel, or as we experience more extreme situations, God will let us turn any condition into a Gospel setting, just like Paul’s defence in front of officials. The victory of the defence itself is not the most important thing, however. The opportunity to turn the process of appealing into the process of sharing the Gospel matters most.”

Officials detained Elder Su Bingsen in the Chengdu Detention Center for the crime of “provocation” in the Dec. 9 religious’ tragedy until his release on bail on April 19, 2019. Because authorities feared Bingsen would be the church leader in Chengdu, the location of his household registration, they transferred him to Ludao, Xiamen. Reportedly, during more than 100 days in prison, his greatest pleasure was reciting The Westminster Catechism. Although Bingsen is introverted, brothers and sisters from the Church believe he will share/preach the Gospel to other inmates as well as police in his path—even through the valley of tears.