Efforts Intensify to Save Long-time Dissident Zhu Yufu, Feared Near Death in Prison 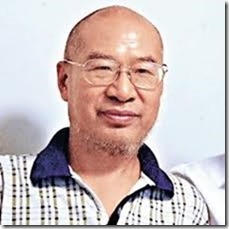 (Hangzhou, Zhejiang–April 17, 2013) Recent efforts to help imprisoned dissident and Christian Zhu Yufu, whose life is feared to be in danger, have apparently resulted in intensified persecution of him, leading to a redoubling of efforts to try to win his release on medical parole.

Last week, ChinaAid founder and president Bob Fu took Zhu’s younger brother and sister in making the rounds in Washington, D.C. to appeal for U.S. government help for their brother, who is in his 60s and in very poor health.

Following those meetings with senior Congressmen who have long championed Chinese human rights cases and with State Department officials, family members back in China who had just concluded a prison with Zhu at the No. 4 Prison in Zhejiang province reported that he had apparently been beaten and had told his family that he feared death was imminent.

As a result those meetings last week, the House Committee on Foreign Affairs, the Tom Lantos Human Rights Commission and the Congressional-Executive Commission on China are drafting a joint chairman’s declaration, and State Department’s director of the Bureau of East Asian and Pacific Affairs has promised to take diplomatic actions.

See our earlier report at: https://chinaaid.org/2013/04/congressman-frank-wolf-calls-on.html

But in light of the most recent report from Zhu’s family, ChinaAid is redoubling its efforts. On April 15, ChinaAid’s legal counsel David E. Taylor wrote the letter below to the U.N.’s Human Rights Council, drawing their attention to the urgency of Zhu’s case and asking the Council to raise the case with the Chinese government and to seek an explanation for its treatment of Zhu. The full text of Taylor’s letter is below.

ChinaAid hopes the U.S. government will face squarely the situation of frequent occurrences of human rights disasters in China and of politically motivated persecution and will take meaningful action that will clearly show the new leadership in China that: a new relationship between great nations that both China and the United States look forward to cannot be formed upon a foundation of disregard for human rights, freedom and other universal values.  We urgently call on the Chinese government to immediately cease its abuse and persecution of Zhu Yufu and give him timely and necessary medical treatment and other humane treatment.  At the same time, we call on the Chinese government to:  immediately release all prisoners of conscience who have been imprisoned for their faith or for exercising their right to free expression, honor and abide by the U.N. covenants and agreements protecting human rights, and truly become a great nation that is responsible and civilized.

As legal counsel to China Aid Association, a non-profit NGO, I bring to your attention a most egregious situation that needs immediate action and urgent intervention.

Zhu Yufu, who is being detained in Prison No. 4, ZheJiang Province in mainland China, is quite obviously being tortured and otherwise subjected to inhumane treatment under international law and specifically in violation of the mandates of this austere body. Below is a communication just received by Pastor Bob Fu from Mr. Zhu’s relatives which details his treatment and his extreme despair. ChinaAid respectfully calls for an immediate communication with the Chinese government about this matter and a complete investigation and report:

“Dear Pastor Fu,
“Last night, April 14th at 1 pm Beijing time, we had a phone call with our sister in law Jiang Hangli who just visited our brother Zhu Yufu in No. 4 Prison of ZheJiang Province. She told us that the prison has treated him more cruel than before after we made an advocacy overseas. Not only did they torture his body but also cancelled his nutrition meal and once a month phone call communication between Zhu Yufu and our family members. According to the account of our sister in law, our brother Zhu Yufu’s head was seen deformed because of swell up. He made our sister in law understand that they abused and tortured him because our advocacy for him in USA. He also was very pessimistic. When our sister in law told him the US Congress and US government are working to rescue him, he looked very cautious and stopped her. This is what he said to his wife: ‘I had been treated very very bad recently. I could not bear any more. You may not be able to see me again next month. If you can not see me, don’t be too sad. Something terrible must have happened to me.’
“Please do something to help, or else he may die soon in the prison.
“Please acknowledge receipt.”
With respect to this complaint and communication, I hereby certify that: · It is not manifestly politically motivated and its object is consistent with the Charter of the United Nations, the Universal Declaration of Human Rights and other applicable instruments in the field of human rights law;
· It gives a factual description of the alleged violations, including the rights which are alleged to be violated;
· Its language is not abusive.
· It is submitted by a non‑governmental organization acting in good faith in accordance with the principles of human rights, not resorting to politically motivated stands contrary to the provisions of the Charter of the United Nations it is based on direct and reliable knowledge of the violations concerned.
· It is not exclusively based on reports disseminated by mass media;
· It does not refer to a case that appears to reveal a consistent pattern of gross and reliably attested violations of human rights already being dealt with by a special procedure, a treaty body or other United Nations or similar regional complaints procedure in the field of human rights;
· Domestic remedies have been exhausted.