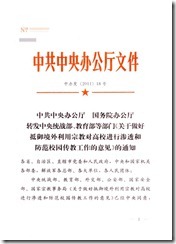 (Beijing–Dec. 18, 2012)  ChinaAid on Tuesday released a secret Communist Party Central Committee document it had obtained that contains detailed instructions for a nationwide crackdown on evangelism on college and university campuses and among students, confirming that China’s leadership at the highest levels is behind the increased Christian persecution of recent years.

(Right: Thumbnail of scan of first page of document. The seconc page and last page are below.)

The May 15, 2011 document entitled “Suggestions for doing a good job of resisting foreign use of religion to infiltrate institutes of higher education and preventing campus evangelism” and known as Document 18 was drawn up by the ministries of education, public security, state security and foreign affairs, the State Administration of Religious Affairs, and the United Front Work Committee, the party organ that oversees religious affairs.  As befitting a document of the highest importance, it was distributed by the Communist Party Central Committee and the State Council.  Only 8,330 copies were printed, and these were distributed to party, government and military offices at or above the municipal or regiment level only.

Its references to “religion” refer mainly to Christianity, and it named the United States as leading the attempts to use Christianity to infiltrate China’s institutes of  higher education.  ChinaAid obtained the document, which has never been publicly released, from informed sources at the top levels of the Chinese Communist Party.

“With China’s rapid economic and social development and the steady growth of China’s comprehensive national strength, … [f]oreign hostile forces have put even greater emphasis on using religion to infiltrate China to carry out their political plot to westernize and divide China,” the document said.  “Foreign forces regard institutes of higher education as key targets for using religion, Christianity in particular, for infiltration.”

“The goal of foreign use of religion to infiltrate institutes of higher education is not just to expand religious influence but even more to vie with us for our young people, our next generation,” it said.

“The real harm and the long-term effects … must not be underestimated, and forceful measures must be taken to respond actively and effectively,” Document 18 said, calling the job of resisting the infiltration and preventing campus evangelism “important to the fate of the country and the fate of the people; it has important and far-reaching implications.”

The document’s authenticity has been confirmed by the respected Sinologist Andrew Nathan, a political science professor at Columbia University and co-editor of The Tiananmen Papers, a compilation of secret documents about the military crackdown on the 1989 student pro-democracy movement, and by the fact that lower-level government and party documents freely available in the document archives of Baidu.com, China’s own Google-like web services monolith, include multiple documents that refer to Document 18 or report progress in implementing the measures outlined in Document 18.  See http://wenku.baidu.com.

“Content-wise, although the specific contents are new to me, they line up with my understanding of the fears the Chinese security apparatus has about religion and about American subversion via religion and culture more generally,” Nathan said.

ChinaAid founder and president Bob Fu said, “It is absolutely laughable to suggest that there is such a thing as American-led religious infiltration as alluded to by the top leadership of China.  In the name of supposedly countering foreign religious infiltration, the repressive nature of both the policies and procedures revealed in the secret document shows the Chinese regime’s disregard for freedom of religion, which is both enshrined in China’s own Constitution and central to international human rights norms and is guaranteed to all Chinese citizens, including university students.”

“We call upon the new leadership in China to reject this outdated Cold War-era mentality and these religious policies,” Fu said.  “Religious freedom will only enhance the moral vigor of Chinese society through a more mature civil society in which both conscience and the rule of law operate.”

The document gives specific instructions on a host of alarming measures designed to combat religious activities on college and university campuses, including expulsion and firing for students and teachers who engage in “illegal” religious activities, warnings about online religious activities and materials, and the establishment of a database shared by government ministries of information about groups and individuals deemed to be engaged in acts of infiltration or evangelism.

ChinaAid has been documenting a steadily rising trend in recent years of the incidences and severity of persecution against Christians, both those from the house church movement as well as those belonging to government-sanctioned Three-Self churches.  See ChinaAid’s annual persecution reports that statistically document this alarming trend at https://chinaaid.org/chinaaid-annual-reports/.

The photocopies of and an English translation of the whole document are posted on the ChinaAid website here: 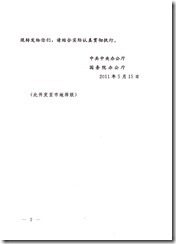 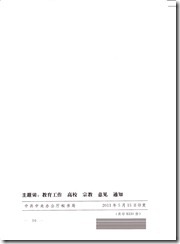