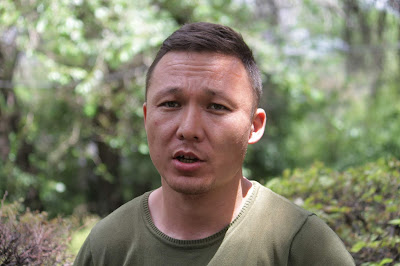 Families of targeted Kazakhs speak out

49 year-old Teleu Wailibek was born in Huoenerkai Village, Zhaosu County, Ili Kazakh Autonomous Region, Xinjiang. He immigrated to Kazakhstan in 2011 with his wife, Ayihan Nurehemaiti, and their two children. However, Nurehemaiti did not obtain Kazakh citizenship in 2013 along with the rest of her family, only a Kazakh green card. Walibek revealed that his wife, who was a teacher in Huoernerkai Village, was allowed to retire in 2011 on account of her deteriorating health. In October 2017, Ayihan’s former school called and she returned to China. The police then confiscated her Chinese passport and Kazakh green card. In response to her detainment, Wailibek stated, “It’s been eight months since my wife was detained in China. I haven’t heard from her.”

Wailibek has since contacted the Chinese government in an effort to get her released and returned to Kazakhstan reunite the separated family.

“The political training center is in essence a prison,” Yahefu Nulahong said. “The guards beat you up no matter how old you are. In their eyes, you are not human. The prisoners have to recite articles by Confucius and study Chinese. They have to memorize the regulations on striking extreme religions even if they don’t speak Mandarin. The prisoners have to demonstrate their love to the Communist Party and the nation. They are transferred to a better cell after passing the exam. My father’s good at Chinese, so he was only detained for three months.”

Nulahong Kabe now has Kazakh citizenship along with his three children. Later on, Yahefu’s 57 year-old mother Ziyire Duonenbayi was detained in April 2017 in Qitai County and has not yet been reunited with her family.

An anonymous Kazakh in Almaty stated that the Xinjiang government forced minority language teachers to retire early after closing the schools dedicated to ethnic minorities. Retired teachers received a pension worth 60-70 percent of their original salaries. Younger teachers became guards, cleaners, and mechanics. The government also stopped paying teachers whose children were attending schools in Kazakhstan.

According to informed sources, the first 10 people, the 18th person, and the 19th person on the above list were arrested because of their religious beliefs. Numbers 11-16 were arrested for travelling to Kazakhstan and staying for a long period of time. Currently, the aforementioned people are in “political training centers,” or a network of detention centers dedicated towards forcing ethnic minorities to learn Mandarin and Chinese policies while torturing them. The first 10 people have also been sentenced three to eight years in prison.

ChinaAid exposes the situations of those mentioned above in order to promote the rule of law, religious freedom, and human rights.