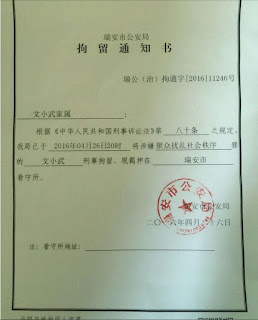 Wen Xiaowu, a pastor, and his wife, both of whom provided legal defense counsel for churches affected by an ongoing cross demolition campaign, were criminally detained on April 26 and charged with “gathering a crowd to disturb social order.” His son, Wen “Eden” Yidian was taken into police custody on the same day for “obstructing public service.”

Family members, however, believe that the detentions are in response to the couple’s meetings with officials from the U.S. Consulate in Shanghai and a number of foreign journalists, during which they released developments on the cross demolitions. Zhang Kai, a prominent human rights lawyer, experienced a similarly sudden detention in August 2015 just a few days before he was scheduled to meet with U.S. Ambassador for International Religious Freedom, David Saperstein.

Wen Xiaowu and his wife are currently being held in the Rui’an Detention Center in Zhejiang. They have not been allowed to meet with family members. Authorities also confiscated various personal items, including computers, from their home in Wenzhou.

“Arresting Pastor Wen and his family members for these meetings is a direct slap in the face to the U.S. government and the American people,” said China Aid president Bob Fu, who is a friend of the Wen family. “He is a man with integrity and passion who is always ready to help others. Despite the constant threats state security agents posed to him and his family in the past few years, he and his wife have been boldly providing legal counsel for churches and persecuted human rights defenders in Zhejiang. I urge the U.S. government to work with the Chinese authorities for the immediate release of the Wen family and other innocent church leaders who are under arrest.”

China Aid exposes abuses such as those experienced by Wen Xiaowu and his family in order to promote religious freedom and rule of law in China.