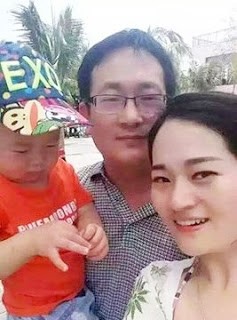 (Linyi, Shandong—April 3, 2020) Human rights lawyer Wang Quanzhang is scheduled for release from prison in China’s Shandong province on Sunday. However, his wife will be unable to immediately meet with him.

Wang vanished into police custody in 2015, during a nationwide crackdown on rights attorneys and activists. For three years, his location remained unknown. Last year, authorities convicted Wang of “inciting subversion of state power,” sentenced him to four-and-a-half years in prison, and deprived him of all political rights for five years.

His wife, Li Wenzu, became an outspoken advocate for her husband, even petitioning Beijing’s Supreme People’s Court more than 30 times. Because of her work, she has fallen under the surveillance of the government.

Li is a Hubei province native who lives in Beijing. Because of COVID-19, Beijing has banned all people originally from Hubei from entering the city, making it impossible for Li to travel to meet her husband without being quarantined on return. Instead, Wang’s family plans to meet him at the prison entrance, and then he will go to meet with Li later on.

However, the officials have not provided Wang’s family with any details on his release. Wang, however, said that he would be sent to Jinan, where his original hometown is. His family believes that if he goes there, it will be against his will since they think he would have wanted to see his wife and son.

Other human rights attorneys are typically subjected to government monitoring after release, making it likely officials will also supervise Wang.