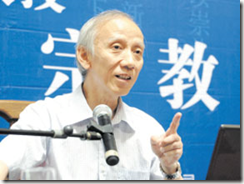 The current society we live in is suffering from a moral cancer where human nature is distorted, corruption runs rampant and people harm each other for their own gains, which has reached an outrageous level!  It is clear to every person of insight that the root of all these illnesses is the current system in the country.

Nowadays, there are still people left in the Chinese society who appeal for and sympathize with AIDS patients who got the disease by selling their blood at stations with flawed systems; there are still people left in our society who show concerns for babies poisoned by tainted milk due to the greed and cold-bloodedness and who fight for damages for the parents; there are still people left in China who show concerns to and fight for the parents whose elementary school children perished in the May 12 Earthquake due to the illegal construction motivated by greed; there are still people here in China who care for and fight for the rights of vulnerable social groups like peasants who have lost their land due to the numerous unreasonable systems and regulations and oppressed migrant workers. There are still people who think over, analyze and criticize the sources in the system that cause the social injustice and come up with their suggestions.  We have to say that these selfless people who devote their time, money, energy and take risks for the compatriots they don’t know by person are the healthy cells of this society.  They are the social conscience of China and it is a pity that we have too few of such people. China is in bad need for such people!
However, for many years in the past, it is these consciences of China who are chased, arrested, detained and who suffer various types of persecution, which has made the conscience of China further wither.  Under such a situation, another group of people have emerged in China who are willing to make their efforts to save China.   They advise each other to worship God and love other people as themselves.  They work hard in looking for more effective ways to make people show their loving care and sacrifice themselves for other people.  They are making their great contributions in making the Chinese society more harmonious and more humane.  These people are Christians in every corner of China, including Christians in the so-called “house churches.”
However, in many years in the past, it is these people who work hard to rescue the conscience of China have suffered various types of restriction, suppression and persecution! Even today, one of the famous house churches in Beijing is facing such a persecution.
These Christians in Shouwang Church are mainly faculty members and students from colleges and universities.  One day before the May 12 Earthquake, their worship service was stopped by the police through brute force.  The police registered the personal information of everyone of them and the police notified their schools so as to exert pressure on them.  At the first worship service after the earthquake, they donated RMB 200,000 yuan to the disaster-stricken areas and called on many groups of people to go and help in the disaster areas as volunteers.  At the end of October 2009, the owner of the house they rented got pressure from the authorities to terminate the lease.  They had to brave heavy snow in holding their services at the gate of a park on November 1 and November 8 for their religious life.  At the end of December, they raised a fund and bought a piece of real estate in the hope that they would be able to worship indoors.  However, after the landlord received the full payment, he has been under pressure and is not able to deliver the house.  Recently, the owner of the house they have rented has also got pressure and he forced them to leave.  In the meantime, the owner of another place they have found has also come under pressure not to rent the house to them.  Persecuted until there is no place where they can go, they have to prepare once again to gather outdoors to worship God, which is tomorrow!
I don’t know what will happen tomorrow, but I worry about these colleagues of mine, students and friends in this church (Everyone of them is a Christian with a loving heart who derives pleasure from helping others, who abides by the law, who is a good citizen and honest scholar who respects the teachers and loves the students) and other fellow Christians because their freedom of religion, personal freedom and rights to properties are being violated and there is not a single sign that this will stop anytime soon.
Therefore, I have to appeal to the highest leaders of the state, the only people who have the abilities and power to improve on such a situation.  I plead with you to consider the above situation and order the agents to stop their persecution.  Only by doing so can we save the conscience of the nation, reduce conflicts and build harmony!
He Guanghu
Professor of Religion
Renmin University of China