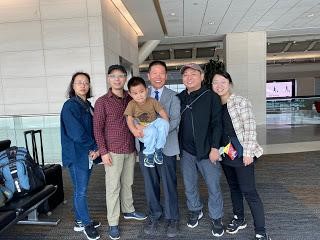 Follow-up on families of ERCC’s Liao Qiang [with Jiawen, his adopted son] and Ren Ruiting, his daughter, now free in the United States

After Ms. Ren’s family arrived in Taiwan on July 4, 2019, the Mainland Affairs Council (Taiwan), the National Immigration Agency, and the Presbyterian Church in Taiwan assisted them and contributed to their care. The Presbyterian Church in Taiwan also arranged for Ms. Ren’s two brothers, both minors, to study in the country’s elementary school and in the church’s private kindergarten. ERCC member Liao Qiang [and family, Ms. Ren’s father] adopted one brother, five-year-old Jiawen. “Originally, several families wanted to adopt him, but changed their minds after they learned that he had required 27 chemotherapy sessions to treat the malignant fibrous histiocytoma in his right arm. Nevertheless, Pastor Bob Fu reported that Mr. Liao’s family ultimately adopted Jiawen. During the past two years, ChinaAid and Taiwan Association for China Human Rights have also helped them as this family successfully obtained political asylum.

Attempting to cut off Ms. Ren’s family’s relationship with the ERCC, police officers threatened to terminate the adoption of Jiawen, three-years-old at that time. “The child is growing up in a cultish family; therefore, we want to save him.” Mr. Liao recalled Sichuan provincial police officers saying.
“Once taken away, [he] will not come back,” Mr. Liao said. This threat of police forcibly taking Jiawen from their family, even though the government had issued a legal adoption certificate, prompted Mr. Liao, to decide to flee to Taiwan with his entire family.
After escaping from China, Jiawen’s life trajectory began to change. In Taiwan, he began to learn traditional Chinese characters. “Jiawen does not recognize simplified Chinese characters, only traditional Chinese ones,” Ms. Ren said. The CCP revised Simplified Chinese characters [easier to write than conventional ones] after the regime established power in mainland China. Taiwan’s education system, however, maintained the same. Although Jiawen did not have permanent residency status in Taiwan, the government guaranteed and protected his rights for an education. Due to Jiawen’s connection to ERCC, CCP officials considered sending him to a “Communist brainwashing school.” Now, free in the United States, he has even practiced “‘Snub-nosed monkeys climbing a tree’ kung fu.”
In a brief speech after arriving at San Francisco International Airport, Ms. Ren said, “(I am) so excited. We have been looking forward to this for two years. Even before arriving in Taiwan, we hoped to apply for a United States visa. Our long-awaited wish is finally fulfilled.”
Medical treatment from Taiwanese doctors effectively controlled the fibroma on the inner side of Jiawen’s upper right arm. When talking about plans for the future, deeply moved with emotions, Ms. Ren said, “coming up, (we) actually want to do things related to the church and help others. Along our way to the United States, we received much help. Before leaving Taiwan, many people provided for us, gave us presents, and helped us pack. We felt warmth. We hope to pass on those warm feelings to others. I see many platforms here in the United States, a great, powerful country, and I want to use these opportunities to help others.”

After arriving in the free world, Ms. Ren did not forget about the treatment of ERCC’s imprisoned Pastor Wang Yi. Together, she, her husband Peng Yuan, as well as her father, and Reverend Fu held up signs with the English words “Free Wang Yi” written across them. 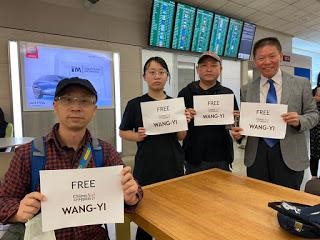 Reverend Fu and Mr. Liao’s family hold “FREE WANG-YI” in San Francisco International Airport. From left to right: Mr. Liao, Ms. Ren, Peng Ran, and Bob Fu.
(Photo: ChinaAid)
One may trace the background of the story of Ms. Ren and her five family members back to the late night of December 9, 2018. When CCP officials raided ERCC, they seized and interrogated hundreds of Christians attending there. As one of those arrested, Ms. Ren’s, along with other church members, suddenly lost contact with the outside world, and experienced a night filled with panic. That night, ERCC members lost their pastors, elders, and deacons. That night, they also lost their church building, theological seminary, and school.

Following this round of persecution, police officers harassed Ms. Ren and her family for seven months, continuously interrogating and monitoring them. Eventually, to avoid the local Chengdu government officials’ continuous tracking, and preventing authorities from stripping Jiawen’s custody, Ms. Ren’s family planned to flee from China. They successfully left Sichuan with a medical visa in 2019, flew to Thailand on July 1 of that year, and arrived in Taiwan on July 4.

Ms. Ren and her family plan to ultimately settle in Orlando, Florida. Meanwhile, Ms. Ren will attend numerous public events in Washington D.C. to call for religious freedom in China.

###
And rescued us from our enemies,
For His mercy endures forever;
~ Psalm 136:24 (NKJV)
China Aid exposes abuses in order to stand in solidarity with the persecuted and promote religious freedom, human rights, and rule of law. If you wish to partner with us in helping those persecuted by the Chinese government, please click the button below to make a charitable donation.