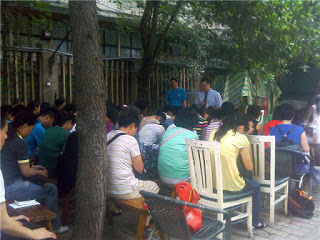 Wang Yi, the pastor of Autumn Rain Blessing Church, reported that four of his congregation members went to a university after a Bible study and passed out Christian materials. They were brought to the school’s security department, where they were reported to the police. Police then arrived at the scene, examined the flyers, and reported them to the Chenghua branch of the public security bureau.

Later, Wang said that authorities brought them to the Jianshe Street Police Station. “Preacher Ying Qiang, Elder Bing Sen, and other brothers and sisters are waiting in front of the police station. I pray to God for a strong, peaceful heart. The people in power will see us as a group of people who stand out from the rest of the world. I hope God can endow the four people with eloquence and wisdom, so they can serve Him….”

The four Christians were released at 3:30 a.m. the next morning. This incident comprises the fourth time the police prevented Autumn Rain Blessing Church’s members from evangelizing this year. On April 9, the police came to one of the church leaders’ homes while Wang’s wife, Jiang Rong, was visiting and asked her about the previous church service the day before. They asked for her ID card, but Jiang insisted that they should show their law enforcement certificates first. They refused, so both sides reached a stalemate, and Jiang called the police. The conflict ended peacefully.

Afterwards, the neighborhood committee and the local police station summoned one of the church members and inquired about the church’s short-term mission trips. At 2 p.m. the same day, officials brought in another church member, and, during the evening a handful of Autumn Rain Blessing Church members attempted to share their faith outside a university, and staff members called the police. They brought one of the members, Ding Shuqi, to the Wangjiang Street Police Station and interrogated him for two hours.

ChinaAid exposes abuses, such as those suffered by Autumn Rain Blessing Church, in order to stand in solidarity with persecuted Christians and promote religious freedom, human rights, and rule of law.