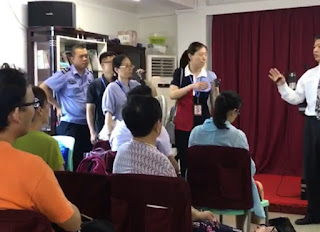 (Guangzhou, Guangdong—June 14, 2018) A small house church in China’s southern Guangdong province was raided in the middle of a service on Sunday, detaining church pastor Huang Xiaoning and three other attendees.

Huang was in the middle of a sermon when officials from the local police station and neighborhood committee broke into Bible Reformed Church, located in Guangzhou, Guangdong, and demanded that he halt the gathering. In reply, Huang said that they had not violated any laws.

The authorities videotaped the church members, took pictures of them, and then detained Huang, a Christian named Wang Chuanjun, and two others working in the church’s kitchen. Once in custody, they faced hours-long interrogation before being released that night.

According to a Christian woman surnamed Li, the church has been harrassed many times before.

Other Guangzhou Christians reported that many churches have been ordered to either cancel their services or move out of their buildings, but since the city has many churches and Christians, police choose not to use violent measures and instead target the smaller churches.

ChinaAid exposes abuses, such as those suffered by Christians in Guangzhou, in order to stand in solidarity with the persecuted and promote religious freedom, human rights, and rule of law.