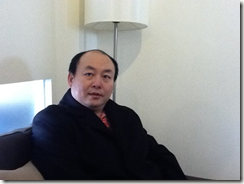 (Andrew Higgins/ WASHINGTON POST ) – With eight of his relatives in jail, his business empire in tatters and his bank accounts frozen, fugitive Chinese executive Li Jun is rejoicing at unexpected good news: The police chief who engineered his misery has himself now vanished into the maw of Chinese state security. 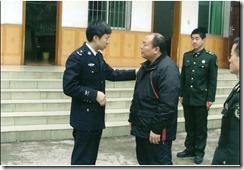 (—– NO CREDIT —–/ —– NO CREDIT —– ) – CHONGQING , CHINA: Fugitive Chinese businessman Li Jun fled the Chinese metropolis of Chongqing to escape what he describes as a violent struggle over property and power. Pictured with investigators during detenion in Chongqing. He later fled China and is now in hiding abroad.

With eight of his relatives in jail, his business empire under police control and his bank accounts frozen, fugitive Chinese executive Li Jun is rejoicing at unexpected good news: The police chief who engineered his misery has himself vanished into the maw of Chinese state security.

“Nobody is happier than I am,” said Li, commenting on the downfall of Chongqing vice mayor and security boss Wang Lijun, who was hauled to Beijing last month after he took refuge at the U.S. consulate in Chengdu, the capital of Sichuan province.

Wang, the right-hand man of Bo Xilai — Chongqing’s Communist Party boss and a prominent member of China’s “princeling” aristocracy — has not been seen or heard from since. “He hurt so many people. How can I feel sorry for him?” asked Li, the self-exiled chairman of the Chongqing Junfeng Industrial Development Group.

Li, once one of the richest men in Chongqing, a mountain mega-metropolis of 30 million people, has spent 16 months on the run. In lengthy interviews outside China, the 45-year-old businessman described a brutal and lawless struggle over property and power in a city where more than 4,500 people have been arrested as part of a crackdown orchestrated by Bo and his now-disgraced police chief on alleged organized crime.

The campaign, known as “smash black, banish evil,” underpins the “Chongqing model,” a system of governance that the city’s energetic propaganda apparatus trumpets as a mix of old-style communist morality, modern economic efficiency and zero tolerance of crime.

Li, the fugitive businessman, calls it “red terror” — the visible side of an intensely secretive and volatile order that has produced China’s most tumultuous political drama in years. Li, whose assets — worth an estimated $700 million — are now controlled by the Public Security Bureau, said the Chongqing governance system “is not a model but a huge catastrophe.” Fearing for his safety, he asked that his current location not be identified.

Li noted that Wang, the purged police chief, was so worried about his own fate after a still-unexplained falling-out with Bo, his longtime patron, that he fled Chongqing and sought shelter with U.S. diplomats 200 miles away in Chengdu. After a night inside the American consulate, Wang handed himself over to security officials from Beijing, refusing to leave with armed police officers sent by Bo from Chongqing.

“He did not want to die,” Li said. More than a dozen people caught up in Chongqing’s crackdown on crime have been executed. Others committed suicide.

Authorities have sought to play down Wang’s dramatic and apparently fearful flight, describing it as an “isolated incident.” Chongqing officials loyal to Bo have suggested that the former police director is mentally unhinged.

The saga has complicated a leadership transition later this year in which the top party job in Beijing will be transferred to Vice President Xi Jinping, another princeling whose father, like Bo’s, fought alongside Mao Zedong. Bo, who yoked his political fortunes to the anti-crime drive led by his wayward police chief, had been expected to join Xi’s inner circle.

Chongqing’s assault on alleged mafia networks began in 2009 and has been loudly applauded by many locals, who cheered the arrest of feared hoodlums and the 2010 execution of Wen Qiang, a notoriously corrupt official who ran the city’s police force from 1992 until 2008.

But amid mounting concern over confessions made under duress and other abuses, human rights activists and lawyers complain that the anti-mafia campaign tramples due process and risks branding legitimate private businesspeople as mafia dons.

“How can private entrepreneurs feel safe?” said He Weifang, a law professor at Peking University who studied in Chongqing and took classes taught by a legal scholar who defended Li’s now-jailed brother, who was arrested after Li fled. The seizing of private assets, he added, “reminds people of what Jews suffered during World War II.”

Big state-owned companies, though widely viewed as among China’s most graft-addled enterprises, have been spared from attack.

Tong Zhiwei, a law professor at Shanghai’s East China University of Political Science and Law, said Chongqing has battered criminal gangs but, in the process, has also “destroyed the legal system.” He wrote a lengthy report last year detailing how “police prepare all the food, prosecutors serve it and the courts eat it.”

When Bo, the charismatic son of a Mao-era revolutionary leader, took over as Chongqing party chief in 2007, Li, the businessman, didn’t see much reason to worry. Bo, a former commerce minister, had a keen interest in economics and a reputation for getting things done. Nobody paid much attention to the fate of Jiang Weiping, a journalist who spent five years in jail after he reported on how Bo had covered up corruption among friends and relatives while working as a senior official in Manchuria in the 1990s.

Li also had connections. The businessman, originally from Hubei province, moved to Chongqing in 1984 as a soldier in the People’s Liberation Army and, after five years of service, set up a small trading business and then a gas station. Other ventures followed, including a restaurant, a karaoke parlor and a small sauna, a line of business often associated with vice.

His main moneymaker, though, was property, which spawned a string of companies involved in construction, design, leasing and decorating.

In 2008, he got a big break with the purchase of plots of undeveloped military land in Chongqing’s Shapingba District. They cost him nearly $80 million, he said. He closed the sauna, which he said didn’t make money.

At around the same time, Bo, eager to impress leaders in Beijing and gain elevation to the Politburo Standing Committee, launched a morality drive called the Red Culture Movement and featuring “red songs,” Mao-era anthems praising the party. Like other businessmen, Li had to organize singalongs at work and send employees to mass “red song” rallies. Then the arrests started, supervised by Wang, Bo’s police chief, who is now incommunicado and under investigation in Beijing.

“Every day the newspapers had news about new arrests. I worried I would be next,” recalled Li, who has three daughters, one of whom is studying in Washington.

In December 2009, he got picked up by police, who he said beat him repeatedly during questioning that focused on his land deal with the military. Interrogators, he said, told him that he had upset Zhang Haiyang, a senior army officer in the region — and yet another princeling — whose relatives allegedly coveted the property. Zhang, whose wife is the offspring of a senior official, has since moved to Beijing and is now political commissar of the 2nd Artillery Corps, which controls China’s nuclear missiles.

Li said he was kept chained for days to a “tiger bench,” a metal chair designed to maximize pain, his arms and legs shackled while security agents pummeled him, screamed abuse and demanded that he confess.

Held for three months in police and military establishments, Li was cleared of any wrongdoing in March 2010 and released after agreeing to cough up 40 million yuan, or $6.3 million, in “compensation, according to a document issued by the Chengdu Military District Political Security Department. Li said he owed nothing but had to pay to secure his freedom.

Chongqing authorities declined to comment on Li’s account. “We have not heard such things, and we don’t think it is necessary to give any response,” said an official at the propaganda division of the Chongqing Public Security Bureau who declined to be identified.

‘I’m a businessman,’ not gangster

In October 2010, while on a business trip to Chengdu, Li got a tip-off that he was about to be arrested again. He fled the following morning to Hong Kong. His wife intended to flee, too, but didn’t have the necessary paperwork. She was arrested and spent a year in jail.

Other relatives also were picked up, including an older brother, Li Xiuwu, who was sentenced in December to 18 years in jail for leading a “black society,” the Chinese term for a mafia-like crime syndicate. He was fined $32 million.

“They couldn’t get me, so they got my older brother,” said Li, who added that his sibling played no role in managing his company.

The verdict, issued by the Shapingba District People’s Court, details the state’s case, describing a host of unrelated crimes that include prostitution and loan-sharking. The Junfeng Industrial Development Group, ruled the court, served as a “cover for a series of illegal and criminal activities . . . that oppressed and hurt the masses, severely damaged the local economy and disrupted social order.”

The group’s now-frozen assets are due to be handed over to a state-owned company that has ties to local officials.

Li dismissed the case as “all lies,” noting that the prosecution focused on an entertainment venture that accounted for just 2 percent of his group’s revenue. “I’m a businessman, but if you upset somebody [in power] you are a gangster.”

With 1,500 managers, accountants, architects, construction workers and others on the payroll, he scoffed at accusations that he spent his time “collecting pennies from hookers.”

He said he is broke, having kept all his money in China instead of moving it overseas: “I never thought things would turn out like this,” he said.