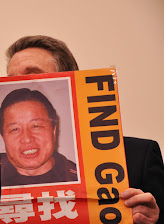 (China Aid Association: September 28, 2020) The UN Security Council on the arbitrary detention and enforced disappearance of human rights advocates and lawyers in the People’s Republic of China, invited, Geng Ge, the daughter of Gao Zhisheng, a Chinese human rights lawyer, to address their 45th session.

Geng Ge spoke about the three-year enforced disappearance that the Chinese Communist Party (CCP) decreed for her father, Gao Zhisheng.

The Human Rights Office of the High Commissioner defines an enforced disappearance by three cumulative elements:

1. Deprivation of liberty against the will of the person;

2. Involvement of government officials, at least by acquiescence;

3. Refusal to acknowledge the deprivation of liberty or concealment of the fate or whereabouts of                the disappeared person.

The CCP has repeatedly arrested and imprisoned many human rights advocates, including lawyers, religious figures, scholars, and journalists, routinely accusing them of crimes such as “inciting subversion of the state power.”

These actions violate the basic rights of the Chinese citizens as well as the constitutional provisions the CCP formulated. Article 37 of the Constitution of the People’s Republic of China stipulates: “Illegal detention and other illegal deprivation or restriction of citizens’ personal freedom are prohibited, and illegal search of citizens’ bodies is prohibited.”

In addition, Article 41 states that “citizens of the People’s Republic of China have the right to criticize and make suggestions against any state organ or state functionary; and they have the right to lodge a complaint, accusation or report to the relevant state organ for the illegal and dereliction of duty of any state organ or state functionary, but they shall not fabricate or distort the facts for false accusation and frame-up.”

Despite knowing the CCP did not guarantee their constitutional protections, Gao Zhisheng, a political activist criticizing the Communist Party of China, courageously defended rights and interests of religious minorities and victims of state persecution. Gao emphasized that the CCP regularly tortures Falun Gong* students.

In 2005, Gao announced his withdrawal from the Communist Party and sent an open letter to CCP officials calling for an end to the persecution and torture of Falungong students. Shortly afterward, government officials revoked his right to practice law and placed him under house arrest.

After his release from prison in August 2014, Gao Zhisheng remained under house arrest for three years. He escaped on August 13, 2017, for three weeks before the police detained him without formal charges.

Since 2017, the CCP has repeatedly refused to provide Gao Zhisheng’s family with any information on Gao Zhisheng’s. No one in Gao’s family knows his location, status, or reasons for his detention.

Geng Ge told the UN Human Rights Council that she does not know if her father is still alive. She expressed support for other victims and “urged the Chinese authorities to release the rights activists who have been forced to disappear.”

Geng said, “I will never forget my father, one of the rights activists who have [sic] been forced to disappear.”

The follow-up agenda of China Aid Association included a request for the United Nations to send an independent investigator to China to search for Gao Zhisheng. Millennium Danatama Group, a partner of China Aid Association, expressed their support for efforts to end Gao’s enforced disappearance and facilitate his return to his family.

*William L. Blizek, “Ask No Questions,” Journal of Religion and Film 24, no. 1 (2020). Originally, the Chinese government supported Falun Gong, first taught in China in 1992. In 1999, however, when Falun Gong became the second-largest religion in China (Chinese Buddhism the largest) and more popular in China than the Communist Party, the Chinese Communist Party (CCP) started calling Falun Gong a cult. The CCP arrested members, tortured and killed them, and then reportedly sold organs of some murdered members on the black market. As persecution became worse, Falun Gong members went underground.