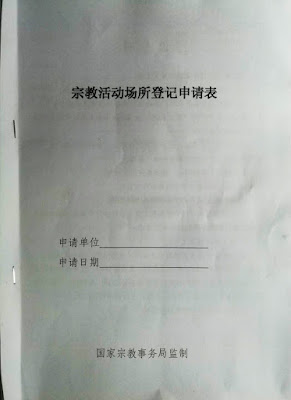 
(Beijing—May 26, 2018) House churches across China are being forced to fill out a registration form that must be submitted to the national religious affairs bureau. This form includes personal information that could jeopardize the security of house churches.

Most recently, house churches in Henan and Anhui received the registration form. This form specifically requested the name and address of the location of their gatherings, the fire safety installation conditions, the sources of funding, the names of people in charge, and information about the ownership of property. Copies of these filled out forms will be kept by the religious affairs bureaus in each county, city, and province. Some Christians speculate that this registration is the first step in the total elimination of house churches.

The official title of the form is called “The Application Form of Registration For Religious Venues.” ChinaAid obtained one of these forms and confirmed that church leaders must fill out security compromising information such as names, number of church members, birth dates, occupations of leaders, and clergymen.

On May 21, an anonymous church member from the countryside of Anhui told a reporter that officials from the local government delivered the forms to them and demanded that they be filled out. The church member was very confused by the forms: “They gave the form to our pastor. We don’t know what to put down, because we belong to a house church. We usually gather at home. Do our houses count as religious venues? We don’t even have a fixed meeting point.”


These forms are currently being issued to churches all across China.

On May 22, a Christian from Zhengzhou, Henan, told a reporter that the registration forms were an obvious attempt to persecute house churches. The Christian also stated to the reporter: “It’s apparently a strategy for suppressing the house churches. The Application Form of Registration is only nominally a registration. It is actually an application. In other words, you are filling out an application, and the local governments reserve the right to turn down your application and prevent you from gathering. We don’t know how to cope with it now, nor do we know whether we should fill it out or not. We haven’t started, because the form requires personal information. The church leaders can’t publish the personal information of the church members.”

Some Christians are even speculating about the legitimacy of the forms given to them.

Another local Christian said that the Application Form of Registration of Religious Venues is officially issued by the national religious affairs bureau, but the Christians have to submit the filled forms to their local governments. These documents also do not contain any official titles or stamps from the local governments. The local Christian questioned: “How can we make sure that the registration form is actually required by the national religious affairs bureau?”

ChinaAid exposes abuses, such as those suffered by house churches throughout China, in order to stand in solidarity with the persecuted and promote religious freedom, human rights, and rule of law.