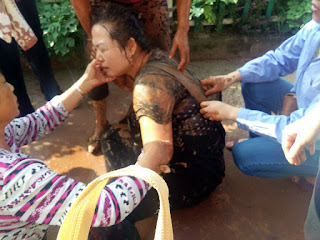 (Ezhou, Hubei—Aug. 25, 2017) Gangsters hired by the Chinese Communist Party beat a group of Christians in China’s central Hubei province on Tuesday, causing one woman to collapse as officials looked on.

On Aug. 22, a group of men described as “hooligans” by local Christians arrived at an outdoor church service in Ezhou, Hubei, and beat the people gathered there. Hao Zhiwei, the church’s pastor, said, “The gangsters held shovels in their hands, slapping the backs of those getting out of their cars with them. Some believers’ arms were slit open. The gangsters even tried to strangle some of the believers.”

In addition, the intruders poured a bucket of mud onto Yu Hongxing, one of the group’s leaders, who suffers from high blood pressure and heart disease, and beat her until she fainted. The gangsters claimed she was pretending and kicked her. When she did not respond, an ambulance was called. Her blood pressure had risen to more than 200, and she was taken to the home of a local Christian to rest.

Another Christian woman’s face swelled up after the gangsters hit her.


During the beatings, government officials drove up and down the street videotaping the event. According to a man surnamed Zhang, who is also a pastor at the church, “[The gangsters] had the government behind them, so they were not afraid of anything.”

In December 2016, the local government banned the church for “organizing religious activities without permission.” On Jan. 10, 2017, police and officials from the urban management brigade broke into the church, forcibly removed its sign, and confiscated chairs and desks. Since then, the church has met outside every Tuesday, and has been attacked by the government each week. On July 11, government officials threw firecrackers at the Christians, and four church members, including Yu and a person named Xu Chang, received five-to-seven day administrative detention sentences. A Christian woman was injured when authorities hurled mud at the congregation on Aug. 8 and threatened to fling paint and excrement at them the next week. It is unknown whether or not they acted on this threat.

ChinaAid exposes abuses, such as those experienced by church members in Ezhou, in order to stand in solidarity with persecuted Christians and promote religious freedom, human rights, and rule of law.