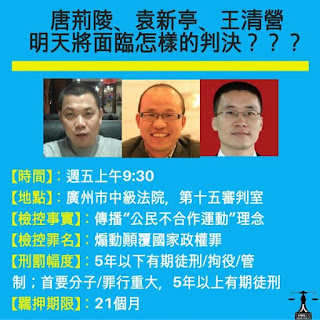 Tang Jingling received a five-year prison sentence, while Yuan Xinting and Wang Qingying were sentenced to three-and-a-half and two-and-a-half years in prison, respectively.

(Guangzhou, Guangdong—Jan. 28, 2016) Authorities in China’s southern Guangzhou province plan to announce the verdicts of three individuals, including a human rights lawyer, at 9:30 a.m. tomorrow at a local courthouse, 21 months after taking the accused into police custody.

According to a photo created by China Human Rights Lawyers Concern Group (CHRLCG), authorities will announce the verdict for three detainees facing the charge of “inciting subversion of state power,” which carries a maximum sentence of 15 years in prison, tomorrow. The three were detained for their participation in a movement that encouraged non-violent civil disobedience.

Tang Jingling, a human rights lawyer, China 18 member and founder of the movement, was taken from his home on May 16, 2014, and originally detained on the charge of “causing a disturbance.” At the same time, they searched his home and confiscated two computers, three cellphones and a camera. Officials held Tang at Baiyun Detention Center in Guangzhou, where they beat him.

The announcement will take place in courtroom No. 15 of the Guangzhou Municipal Intermediate People’s Court.

China Aid exposes human rights violations, such as those experienced by Tang Jingling, Yuan Xinting and Wang Qinying, in order to promote human rights and rule of law in China.