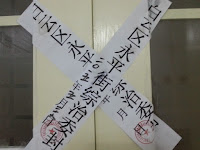 (Guangzhou, Guangdong—June 2, 2015) Guangfu House Church in the southern city of Guangzhou is taking its case to court after being closed down by government authorities following weeks of threats and harassment including a Sunday raid by 100 police officers and other uniformed men.

Church leader Ma Chao attempted on May 25 to file a complaint with the city’s Baiyun District Court, but the court refused to accept it. The church had to wait until Wednesday, when the lawyer it hired was able to fly in, to try again.

This time, the lawyer, surnamed Fang, managed to persuade the court to accept the filing, but only after prolonged negotiations, according to China Aid special correspondent Qiao Nong in Hong Kong.

The legal action followed on the heels of a Sunday morning raid on the church in the southern province of Guangdong when a 100-strong force of police and dozens of other men in uniforms emblazoned with “Special Training” broke up the service and stopped the more than 20 Christians from praying.

They later rounded the church members up and took them in for questioning at the local police station and neighborhood committee office, during which they were warned not to meet again. In the process, Ma was forcibly restrained.

“They arrested us with no summonses for questioning and no arrest warrant,” said Ma, adding that the police also confiscated video cameras that filmed the raid and forced church members to delete photos of the raid from their cellphones. “Their motivation for not allowing us to hold on to any evidence is so that they can commit all manner of evil.”

Following Ma’s failed attempt on May 25 to lodge a complaint with the district court, the doors to the church’s meeting site were sealed the following day by the Yongping sub-district neighborhood committee management office.

“Before I had even arrived at the church, they already started sealing up the doors. Without giving me any kind of written notification, they sealed up both our doors, one was the door to the meeting room and the other the door to our office … They had no legal authority to do this,” Ma said.

Lawyer Fang confirmed that the neighborhood committee’s actions had no legal effect.

Ma said that even though they no longer had access to their church space, the Christians would continue to worship in the hallway and would not give up meeting together.

The government’s latest moves against Guangfu Church began on May 4 when more than a dozen officials who said they were from the domestic security protection squad and the religious affairs bureau forcibly entered their meeting site where some 30 church members had gathered, declared it was an illegal meeting site, and started taking photographs.

When the church members demanded to see the officials’ photo identification, they were told that no one was carrying identification. Instead, the officials provided one business card for Yu Guigang, the director of the Baiyun District United Front Work department and the Baiyun District Religious Affairs Bureaus. Repeated calls by reporters to the number on the card went unanswered.

That same day, water and electricity were cut off to the meeting site, which Ma had purchased for church use. From 2012 until mid-2013, water and electricity to the premises had been repeatedly cut, and were only restored after several rounds of negotiations and payment of more than 40,000 Yuan (US $6,450) to the property management company and the utility companies.

Also on May 4, the landlord of another site the church was renting for its meetings terminated the lease. In the past three years, wherever Guangfu Church members chose to meet — whether it is in hotel rooms or leased premises — police were on hand to harass and pressure the church members

The government’s next move occurred on May 22, when Ma was summoned to the sub-district neighborhood committee office by Yu Guigang and issued a written notice ordering the church to stop its activities. The notification, bearing the seal of the Baiyun District Bureau of Ethnic and Religious Affairs, said the Guangfu Church meetings were illegal because they had not been approved by the government departments in charge of religious affairs. Ma was warned that if the church continued to meet, multiple government departments would join forces to stop the meetings.

Yu ordered Ma to sign the notification, but Ma refused. When Yu tried to persuade Ma to register his church, Ma said he told them, “You people, you do things that are illegal and go against the will of the people. I say you should follow your own laws and regulations in enforcing the law, and I’ll act according to my own religious beliefs.”


A lawyer from the Ge Yongxi law firm in Guangzhou said that according to China’s administrative regulations, the United Front Work Department has no authority to issue such an order.

“If they arrest people after issuing such an order, that would be a joke,” he said. “Based on their current regulations (the religious affairs bureau) also does not have this kind of authority. But they are just doing whatever they like. It’s really become very chaotic.”

Ma appealed to the international community to pay attention to their case.