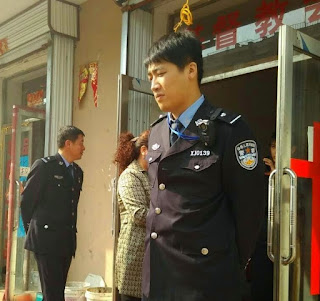 “When we were gathering on April 29, people from the domestic security protection squad (DSPS), the local police station and the religious affairs bureau entered our building and demanded that we stop the worship service,” said a female leader, Yu, from the Home of Bodani church in the city of Yichun. “When they entered the room, one church member was delivering a sermon. I told them that we were worshipping and that they could tell us whatever they wanted after our gathering was over. A man said no and that he wanted to talk to the person in charge.

“Our leader is an elderly man named Dong Shiyun. He couldn’t do anything but follow the officers out of the building in order to not disturb the gathering,” Yu said. “I followed, too, and heard them say that our gathering is illegal because we don’t have a ‘site registration permit.’”

Yu said there were 10 people at the gathering, most of whom are elderly people who live near the gathering site. She also said the church has been meeting at the site

“We negotiated with them, and they said we should go to a TSPM church because it is a state-approved church,” Yu said. “Our church leader said that we are different from the TSPM church as we only worship God. Then, the authorities said if we don’t go to a TSPM church and continue to worship on our own, we will be considered a cult.

“They demanded that we go to the religious affairs bureau to apply for a permit,” Yu said. “However, I’ve heard it’s impossible to get a permit at this point. But we did the application process and submitted the required paperwork; we haven’t gotten a response yet. We were told not to hold another gathering before we received a permit.”

China Aid’s reporter contacted the Xilin District Religious Affairs Bureau director, Zhao Wendong, after the incident and asked about the circumstances regarding registering the church.

“We have ‘Regulation on Religious Affairs.’” Zhao said. “[The circumstances] are clearly written there. You can read it on the Internet and see all the regulations. We do things according to normal procedures.”