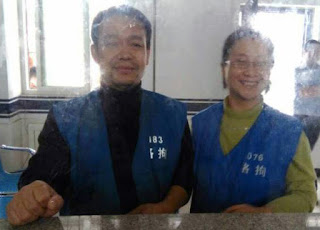 China Aid
Reported and written in Chinese by Qiao Nong. Translated by Brynne Lawrence and Carolyn Song. Edited in English by Ava Collins.

(Luoyang, Henan—Nov. 17, 2015) A 69-year-old Taiwanese pastor and his wife, both of whom have New Zealand citizenship, were detained in China’s central Henan province with four leaders of the house church training they were visiting.

Shen Zhenguo and his wife, Li Jianghua, were visiting the 71st Street Christian Church in Luoyang on Oct. 13, when more than 30 officials from various government security organizations raided the church and declared that the meeting was an illegal religious gathering.

The church was in the midst of a five-day Bible training session with more than 70 church leaders from Henan and Shanxi provinces at the time of the raid. Officers took information from the ID cards of those present and issued a formal notice banning further meetings in the church.

Five leaders of the training were detained: Shen and Li Jianghua, 71st Street Church’s Pastor Li Jia’en, a Shanxi pastor, Ms. Li Jiangtao, and a Henan pastor, Liang Jing. All five were detained by Xigong County Police for 15 days for “using a cult organization to undermine law enforcement.” A translation of the administrative penalty notice issued for the detention of the five pastors can be read here.

When asked if Shen, who is 69 years old, was required to serve the full sentence, police told Li Ji’aen that only those older than 70 may be exempted for age concerns. One of the detained told China Aid that the group asked if their sentences could be doubled in exchange for Shen’s release, but authorities refused.

The church was ordered the church to “cease all activities.” A formal notice of penalty, pictured and translated below, was issued, declaring that seventy people had engaged in underground church activities and banning all further meetings. For the past five years, the 100 members of 71st Street Church held meetings in a rented house.

“We were put in detention, the church was closed, and now we must pay more than 10,000 Yuan (U.S. $1,600) every month for a house that we cannot use. The shops nearby were all given public security cards, telling them to call authorities if they catch us meeting,” Li Jia’en said.

The detainees were held in Luoyang Detention Center for 15 days and were released around noon on Oct. 29. Shen and his wife, in poor health following their detention, returned to Taiwan for recovery soon after their release. 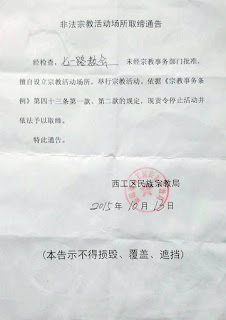 Notice of Ban on Non-Religious Venue

It has been found by inspection that, 71st Street Church established a religious venue and held religious activities without the approval of the religious affairs department. Now, on the basis of the Regulations on Religious Affairs, Article 43, Item 1 and Item 2, [this organization] is ordered to cease activities, and shall be banned according to the law.

(This notice may not be covered, damaged, blocked)