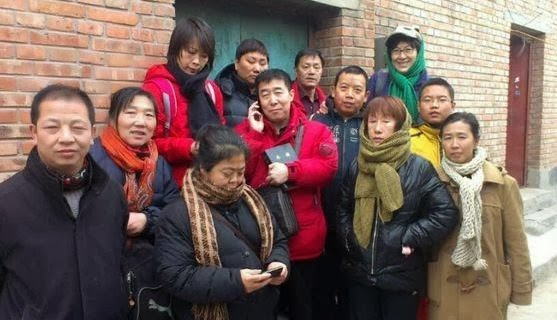 
(Beijing—Jan. 26, 2014) Fifteen Christians were detained on Friday after they attempted to bring food and medicine to another believer who was under house arrest.

Nineteen church members from Holy Love Fellowship in Beijing, including church elder Xu Yonghai, went to the home of Zhang Wenhe, another church member, on Friday to have a bible study. Upon arrival, the group found that Zhang Wenhe was under house arrest at another location and that he was having heart problems.

The Christians gathered food and medicine to take to Zhang Wenhe were he was being held. While taking the items to Zhang Wenhe, police officers from Liyuan, a town within Beijing’s Tongzhou District, detained 15 of the believers, including Xu Yonghai and a 14-year-old boy. The few who were not taken into custody were elderly, sick or disabled.

By midnight Friday, after all the written records of the detainment were finished, the Christians still had not been released. Xu Yonghai’s wife told ChinaAid that she wasn’t able to reach her husband and that his cell phone was turned off.

ChinaAid learned that police denied the believers food until very late in the evening, when the police finally gave into the detainees’ protests. The Christians were given two steamed rolls each.

· Zhang Wenhe, the believer who was to host the bible study

· Wang Biao and his son, visiting from Tianjin, one of China’s five municipalities, a 30-minute train ride from Beijing

· Wang Chunyan, who began having heart trouble during detainment

Rather than postponing prosecution until after the New Year’s celebration, which begins on Jan. 31, the Beijing Public Security Bureau is believed to be attempting to stabilize and control all important and dangerous citizens.

ChinaAid strongly denounces the relevant authorities in Tongzhou District, Beijing for violating the rights of the citizens. We call on them to immediately release all the detained Christians. We also ask Christians both in China and abroad to pray for the brothers and sisters who are being persecuted. We hope the Chinese Communist authorities can repent immediately, stop persecuting religious individuals or organizations, and not treat justice as their enemy.