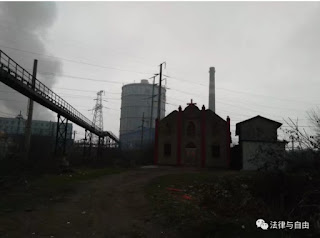 (Ezhou, Hubei Province—February 15, 2022) Authorities arrested Mrs. Hao Zhiwei, the pastor of a house church in Ezhou because she refused to join the government-sanctioned Three-Self Church. On February 11, after more than two and half years’ imprisonment, Echeng District Court sentenced her to 8 years under the charge of “fraud.” Her lawyer Mr. Si Weijiang visited her in the prison, and she decided to appeal.

The reason given by the government for her arrest was suspicion of ‘fraud’ because she preached the gospel and received offerings without the approval of ‘The Committee of the Three-Self Patriotic Movement of the Protestant Churches’ and ‘The Christian Council.’ According to lawyer Mr. Si Weijiang, her case was probably the first case that a house church pastor was charged with ‘fraud.’ After she was arrested, authorities arrested more house church pastors under the same charge. For example, Elder Zhang Chunlei of Guiyang Renai Reformed Church; Elder Hao Ming, and Elder Wu Jiannan of Deyang Early Rain Qingcaodi Church. On November 28, 2021, Elder Li Yingqiang of Chengdu Early Rain Covenant Church wrote an article titled “My Three Comments on the Chinese Government’s Use of ‘Fraud’ Charges Against House Church Preachers and Offerings”. He wrote:

Chinese house churches receive offerings from Christians and use the money to financially support preachers. This conforms to the teaching of the Holy Bible and is adopted by churches all over the world. Christians’ offerings and the church’s support for preachers are closely related to the Christian church’s identity and mission.

Since the new “Regulation on Religious Affairs” took effect in February 2018, the Chinese government adopted many different ways to persecution house churches: Chinese-Characterization of Christianity; removing crosses, sealing up and demolishing church buildings; banning church offerings; and arresting preachers using the “fraud” charge. But this could also be an opportunity to purify Chinese house churches. Many disqualified preachers will be revealed, and they will leave the clergy positions they should not have taken. On the other hand, God’s chosen loyal servants will also be revealed. The “fraud” charge is only one of the charges the government uses against preachers. Other charges include: “illegal business operations,” “inciting subversion of state power,” “picking quarrels and provoking trouble” and so on. These charges are thorns on loyal preacher’s head and God’s crown for His loyal servants.

Pastor Hao Zhiwei is 51 years old. She graduated from Zhongnan Theological Seminary in 2001. Because she is an excellent preacher, Egangqiao Church hired her as its preacher. Egangqiao Church is a Three-Self Church in Ezhou. Because she disagreed with the way the Religious Affairs Bureau managed the church, they tried to stop her from preaching. Her application for pastor certification was denied in 2007. Then, the local government banned the church, so the church became a house church. Pastor Hao shepherded the church for more than 18 years. According to house church tradition, her church invited three pastors to ordain her as a pastor in 2013. She also encouraged her classmates of Zhongnan Theological Seminary to separate from Three-Self Churches.

In early 2018, the local government brought up a request to demolish and relocate the church building, but church members denied the request. Officials issued Pastor Hao a notice and asked her to cooperate with the project. Pastor Hao’s husband died of liver cancer in 2018. She was distraught about her husband’s passing and did not respond to the notice in time. On July 31, 2019, she was arrested under the charge of ‘fraud.’ Her case was transferred to the Protectorate in September.

In August 2019, the Egangqiao church building was demolished. Although the 18-year–old building was surrounded by barbed wire, some Christians still crossed and held a worship service. Another two co-workers were arrested together with Pastor Hao. They were imprisoned for two years and then released on bail. The Protectorate recommended a sentence of more than 10 years for her. The trial was originally scheduled for August 2020 but was postponed due to COVID-19.

On February 11, 2022, Paul wrote the following letter to his mother after he knew the sentence she received. He told his mother in the letter:

I grew up a lot while you were in prison. I am no longer a shy and timid boy. Now I can handle many things on my own. I conquered countless problems with God’s help. I took the College Entrance Exam and was enrolled in college. My college is full of God’s grace. I get along with my classmates. I am really thankful for God.

Mr. Si posted letters Pastor Hao wrote to her kids in 2020, and the letter Paul wrote after the sentencing. Mr. Si said, “I cannot stop crying after reading these letters!”

The following letter was verbally expressed by pastor Hao during the visitation in July 2020, organized by Mr. Si. In her letter, she blessed her son Paul to lead his younger brother to believe in God:

God has a plan for our life. He shepherds His people. He will shepherd you. Blessed are the merciful, for they will be shown mercy.

You did not give yourself up during tribulation because God loves you and holds you. I am very happy when I heard you got more than 500 points in the College Entrance Exam. I fasted and prayed for two days during the exam. I pray for both of you every day. I pray God is with you. My heart is also with you. Do not be afraid. The triumph will come soon. God’s resurrection and triumph are true.

She also encouraged her kids to spend more time reading and remembering the Holy Bible, especially Romans chapter 8, Isaiah chapter 26-66, and Lamentations chapter 2-3. She said she will check their “homework” after she comes back home.

After Paul heard his mother was sentenced to 8 years, he found it difficult to express his complicated feelings. He has not told his younger brother Moses. He wanted him to stay in school. He said: ”Whatever the result, I believe God is using this to temper our hearts.”