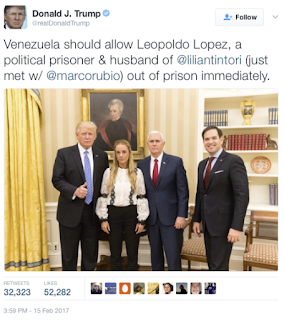 (Washington, D.C.—Feb. 17, 2017) In celebration of the major political headway carved by the wives of Venezuelan political prisoners in Washington, D.C., this past week, China Aid urges international leaders and governments to speak out on behalf of all the world’s prisoners of conscience, including those jailed in China.

According to an e-mail penned by Jared Genser, the founder of Freedom Now and the managing director of Perseus Strategies, LLC, Lilian Tintori and Mitzy Ledezma, the respective wives of incarcerated Venezuelan dissident Leopoldo López and detained Caracas Mayor Antonio Ledezma, traveled the U.S. capitol on behalf of their husbands this week. Opening his statement with “I have seldom had such a mind-blowing week in Washington….” Genser proceeds to describe the whirlwind of events that culminated in Tintori meeting with and garnering the support of President Donald Trump and Vice President Mike Pence, among other prominent officials.

After his meeting with Tintori, Trump tweeted a message urging Venezuela to immediately release López.

These events come in the midst of tightening tensions between the two governments, as the U.S. recently moved to sanction Venezuelan Vice President Tareck El Aissami for his alleged involvement in the drug trade. Since Trump and Pence have now set a precedent of speaking out in favor of Venezuelan prisoners of conscience while the relationship constricts, China Aid presses them and other government officials to consistently prioritize the rights of imprisoned dissidents in China and around the world over appeasing these countries in favor trade deals and economic gain.

López, who is serving a 13-year prison sentence for utilizing “subliminal messages” to incite violence, entered solitary confinement last year and is suffering various injustices, including denial of reading and writing materials, being strip searched 10 times per day, and having every conversation recorded. In one instance, guards coated his cell with buckets of feces and cut off his water supply in order to prevent him from cleaning it.

Genser’s e-mail can be read in full below.

China Aid congratulates Lilian Tintori and Mitzy Ledezma on their success in Washington, D.C., and hopes that someday religious freedom, human rights, and rule of law will be upheld in every country, including China.

I have seldom had such a mind-blowing week in Washington, with the visit of Lilian Tintori, the wife of imprisoned my client and Venezuelan prisoner of conscience Leopoldo López. It culminated in an Oval Office meeting with both President Trump and Vice President Pence, thanks to Sen. Marco Rubio (Trump Tweet below). While the Trump Administration is under fire on a wide array of topics, in a single week, it has abandoned the failed engagement policy of the Obama Administration on the U.S.-Venezuela relationship. And this dramatic turn was exactly what was needed.

When Lilian and I met Vice President Biden in early 2015, he promised Lilian directly that the US would not support any further dialogue with President Maduro without first securing the immediate and unconditional release of all political prisoners. And yet just months later, the Obama Administration abandoned this position and began supporting a dialogue facilitated by the Vatican and UNASUR. With no imposed benchmarks, timelines, or consequences for inaction, the results were no surprise – but engaging in that process removed international pressure on Venezuela as governments and international organizations all deferred action to see if the process could work. Over that time, the number of political prisoners rose from 80 to almost 110.

Meanwhile, Leopoldo has been imprisoned for almost three years of a 13+ year prison term for having used “subliminal messages” to inspire people to violence. He has been held in solitary confinement for more than a year, is strip searched 10 times a day, is denied access to most reading materials and to materials he can write with. He even had his cell covered by buckets of feces thrown in by guards and had his electricity and water shut off so he couldn’t clean anything up for more than a day. And all his conversations are recorded, even with his lawyers.

As he sits in jail, Leopoldo is outpolling President Maduro in a hypothetical presidential matchup by more than 30 percentage points. Also joining Lilian on this trip was Mitzy Ledezma, the wife of detained Caracas Mayor Antonio Ledezma.

As Lilian and Mitzy arrived in Washington, the Treasury Department sanctioned Venezuela’s sitting Vice President as a drug kingpin. President Maduro tried to publicly dismissed this action as merely a remnant of the Obama Administration. The Oval Office meeting was a dramatic rebuke to that assertion. President Trump embraced Lilian with a big hug and both he and the Vice President were very engaged, asked a lot of questions, and sought her advice on how the United States could most effectively advance the democratic aspirations of the Venezuelan people. While much more will be required, it couldn’t have been a better week.

We had an otherwise jam-packed schedule, highlights of which are below.