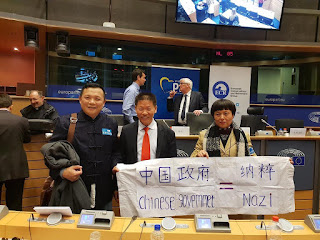 (Utrecht, Netherlands—April 16, 2019) A Chinese petitioner incarcerated in an immigration detention center in the Netherlands after she sought asylum there penned a letter to ChinaAid, pleading for intervention in her case.

Chen Yan, a woman who is known for urging the Chinese government to respect human rights and religious freedom online, has lived in the Netherlands since 2017, when she fled China due to the government’s oppression of her and her friends. She has since been seeking asylum in the European country.

ChinaAid recently learned that Dutch authorities are holding her in an immigration detention center and could deport her. Because of her activism, if she goes back to China, she will be in grave danger.

Read her full, translated letter below, and click here to contact the Netherlands’ Ministry of Justice and Security and tell them not to deport Chen Yan!

My name is Chen Yan. I am from Honghu, Hubei. I was baptized at Gangwashi Church in Beijing in 2007, and afterward, I have continuously attended Beijing’s Antioch house church. In my hometown, I attended Fu Ai house church.

In 2010, I began to extensively spread human rights, freedom, and universal values online, and in 2014, I started to persist in doing righteous volunteer work, persisting in donating money to prisoners of conscience. In 2014, I also participated in the Rose team. Because I often do activities online, I have continuously been threatened and menaced by the local police station, even so much that I was locked in an interrogation room. In 2017, I spoke out online against the Beijing government’s deportation of foreigners, and during the international Human Rights Day, I disseminated information on human rights on the street, and now, the Communist Party’s oppression has become more and more strict. On the same principle, my friends also were locked up more and more. I couldn’t escape the Communist Party, because my list of names was also on the public security department’s list of names. If I didn’t leave, I would have ended up like Jingzhou’s Liu Yanli.

After I arrived in the Netherlands, I actively participated in all kinds of protests, and I personally wrote placards and made videos, exposing the Chinese Communist Party’s evil, taking part in lectures for the French Federation for a Democratic China, and participating in protests of the Communist Party’s coercion of Christian protests, etc. During Li Keqiang’s visit to the Netherlands, four of us went to where he was to engage in protest activities. Because of the intervention of the Dutch police, we haven’t achieved the expected results. I’ve heard the European Union is deliberating the Communist Party’s religious freedom, and I pulled out a banner at the European Union’s general headquarters. Additionally, I had the fortune of meeting Pastor Fu at the general headquarters’ conference room, and we took a group photo to keep as a souvenir.

ChinaAid exposes abuses in order to stand in solidarity with the persecuted and promote religious freedom, human rights, and rule of law. If you wish to partner with us in helping those persecuted by the Chinese government, like Chen Yan, please click the button below to make a charitable donation.