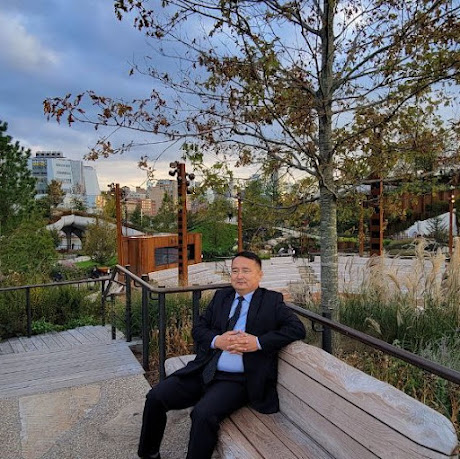 Serikzhan Bilash: The new president came into office in 2019, and he had the same view of our organization as the previous president. My speeches have a significant influence in Kazakhstan, enough to influence the people’s image of the CCP.

Because the government is under moral pressure from the people at home, they demand that the authorities show solidarity with the Kazakhs in Xinjiang. But they (officials) credit it to your efforts, right? So it doesn’t matter how cautious you are.

Serikzhan Bilash: No matter how cautious I am, they see me as a potential danger because of my frequent speeches on YouTube and in-person press conferences. They happen several times every week, and the government saw that thousands of Kazakhs support me. These videos are immensely popular, and my live broadcasts have a high engagement, even more so than Kazakh TV. I have a lot of influence there, so the Kazakh dictators were afraid that the Chinese government would put pressure on them if I exposed the Xinjiang concentration camps. They were worried that the people would follow me. I am almost like a spiritual leader in the eyes of the people. So they want to place me under house arrest and capture me.

Serikzhan Bilash: Kazakhstan is highly dependent on China economically. Kazakhstan participates in China’s “One Belt, One Road” initiative. Kazakhstan is the wealthiest country in Central Asia. Kazakhstan has invested billions of dollars in imported oil and gas exports, mining, and other industries; it is dependent on the Chinese market.

Kazakhstan and Beijing have forged much closer relations over the past fifteen years. China has a considerable influence on Kazakhstan’s politics, and Chinese pressure is the reason why I faced repeated warnings and multiple arrests by the Kazakh security agency.

In my understanding, your punishments reinforce suspicions that Kazakhstan represses rights advocates, and the Kazakh government is working hard to suppress criticism of China’s Xinjiang policies to please its powerful neighbors and investment partners. The Kazakh government seems to bow to the Chinese government, are they China’s shadow government?

Serikzhan Bilash: In 2017, Xinjiang arrested a large number of Kazakhs. At that time, I went to the Minister of Foreign Affairs, senators, government officials, social activists, writers, poets, and celebrities. I went to all of them. After meeting them, they were all reluctant to stand up and speak for the Kazakhs in the Xinjiang concentration camps.

There were many citizens of Kazakh nationality among those detainees, and Kazakhstan was unwilling to stand up for them. Even the Minister of Foreign Affairs said that they are citizens of Kazakhstan. Still, because they have not renounced their Chinese citizenship, they have dual citizenship, which constitutes a crime that was why they were detained in the reeducation center. The foreign minister helps China to speak, and the Kazakh president also speaks for the Chinese government.

Deutsche Welle interviewed the current President of Kazakhstan. When the reporter asked a question about this issue, he responded: “It is China’s internal affairs. There are no concentration camps at all, and Kazakhs have not been taken into reeducation centers.” The Kazakh foreign minister said that there were no incidents of Kazakhs being arrested in Xinjiang. These are the words of those who deliberately create social disruption; these are disturbances deliberately created by foreign forces, and they are interfering with China’s internal affairs. There is no incident of Kazakhs being arrested in China.

We all had thousands of real-life videos released to the public at that time. Despite this, the ministers were reluctant to admit it. At that time, the President of Kazakhstan also said that some external forces wanted to put Kazakhstan at the front line of hostility toward China. We absolutely cannot allow them to do this.

Why did your criticism of China’s Xinjiang policy resonate with the Kazakh people and get their broad support, which caused even the government to be under pressure from the people?

Serikzhan Bilash: First, the people of Kazakhstan are very dissatisfied with the infiltration of the Chinese government in Kazakhstan’s political, educational, economic, and cultural sectors. Second, the Chinese authorities have illegally arrested nearly 500,000 to 700,000 ethnic Kazakhs in Xinjiang. This is a figure we have obtained through scientific methods. We conducted field research in the Atelier area in each county, Ili, Urumqi, and others. After we counted all the people arrested, about 500,000 to 700,000 people were arrested by the Chinese authorities and sent to the “reeducation centers” —concentration camps. The Kazakhs in Xinjiang are of the same ethnicity as us. The Xi Jinping regime’s brutal persecution of Kazakhs is outrageous. Third, the Kazakh authorities provide the Chinese government with the safest and cheapest natural gas; at least, they are members of the Shanghai Cooperation Organization (Shanghai Pact). Even if they were to say one or two sentences to the Chinese authorities, it could cause the Chinese government to release the Kazakhs. But they are indifferent.

Your case must have shocked the high-level officials of Kazakhstan because your efforts clearly will have effects on the correlated interests of Kazakhstan and China.

Serikzhan Bilash: I was blacklisted in Kazakhstan. The Kazakh authorities stuck the label of “terrorist” on me, and when my mother died, the Kazakh Notary Public’s database clearly showed me as a “terrorist.” I don’t even have the right to Power of Attorney. All of my bank accounts have been frozen, my real assets have been frozen, and even my car has been deleted from the mobile vehicle database. I can’t sell my car or even transfer the title. No one else can open it back up. According to the laws of Kazakhstan, if someone wants to drive my car, the owner must give authorization and add that person’s name to the car insurance list. These are all rights I no longer have.

During my house arrest in Nur-Sultan and Almaty in 2019, I met seven times with a man named Maksat Iskakov, a representative sent by President Qasim-Zhomart Toqaev. At one of those meetings, President Iskakov told him: “In September [2019], Toqaev is going to China, and your sentence [and conviction] will go to the Chairman of China.”

What else did he talk about with you?

Serikzhan Bilash: Iskakov suggested that I cooperate with the Kazakh officials and agree to give him a fine and stop activities for seven years. The reason why I decided to sign the agreement was that my goal was not to challenge the Kazakh authorities but to defend the rights of Kazakhs and other Turkic speakers who have been abused in China. I am not a dangerous person to the Kazakh authorities, nor am I an opposition figure or their opponent.

You were under house arrest at that time, and you finally chose your family in exchange for agreeing to stop your political activities for seven years.

Serikzhan Bilash: At that time, my organization continued to run under the guidance of my close friend Bekzat Maxutkan. However, the organization has been struggling under pressure. Two of our members were infiltrated by pro-China groups and eventually parted ways with us. They formed an organization under the cultivation of the Kazakh government and chose to speak for

There are a large number of citizens in Kazakhstan who are related to Xinjiang people by blood or marriage. The Kazakhs are also the second-largest Turkic ethnic group in Xinjiang after the Uyghurs. The Kazakh government seems to be the same as other ex-Soviet countries on the Xinjiang issue, showing a preference toward Beijing’s position. Kazakhstan’s official remarks on Xinjiang are consistent with China’s official rhetoric. Have you been exposed to direct pressure from any Chinese Communist organizations in Kazakhstan?

Mukan Mamytkhan, chairman of one of the six overseas Chinese organizations in Kazakhstan (Otandas El ), joined the two traitors I mentioned previously, together with the El Amanaty organization of Yrysbek Toktasyn, who is a member of the National Security Agency, they sued me to the Almaty Court. Yrysbek Toktasyn deliberately pretended to be an activist, a social activist, a member of the opposition, a dissident. But he is, in fact, a member of the Security Service. In March 2020, they charged me with the crime of creating social discord and for provoking trouble. The infamous article 174 of Kazakhstan’s criminal code.

In 2019, more than thirty pro-Chinese groups in Kazakhstan jointly sued my organization and me, accusing us of “destroying China-Kazakhstan friendship” and asking the court to rule it as an illegal organization. These overseas Chinese organizations have registered with the United Front in Beijing and have maintained a publicly known and intimate relationship with the Chinese embassy in Kazakhstan.

Omaraly Adilbekuly, chairman of Jebeu, one of the six Chinese and overseas Chinese organizations in Kazakhstan, was the true culprit behind my arrest in 2019. These people participated in various networking activities organized by the Chinese Embassy in Kazakhstan, such as the annual “October 1st National Day” dinner. They also attended the Chinese People’s Political Consultative Conference. It cannot be ruled out that these people were instigated by relevant figures in Beijing.

I heard that an overseas Chinese leader threatened you. What was that incident about?

This person publicly announced in 2020 that he would personally kill my three sons and me. He is a prominent figure in the Chinese embassy. I am sure that the Chinese government has exploited these overseas powers. The Chinese government is not only so blatant in Kazakhstan, and they are actually infiltrating their influence in other countries as well.

Is there any other similar situation happening?

Serikzhan Bilash: There is an overseas Chinese organization in Kazakhstan; someone who worked in social media posted a video; and in that video, it said: Serikzhan Bilash, you don’t want a wife, we do. I’m going to go to your wife in Turkey, and if she’s short of money, I’ll give them (wife and children) some money. If she ends up liking me, I can also stay there for a few nights.

Can you identify this person?