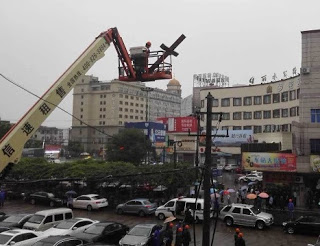 (Gaoyou, Jiangsu—April 23, 2019) Authorities in China’s eastern Jiangsu province demolished 5, 911 temples of a traditional Taoist god within a month, constituting the largest mass-destruction of such faiths since the Cultural Revolution.

On Jan. 2, the publicity department in Gaoyou, Jiangsu, launched a scheme to regulate such temples, which belong to the Taoist god Tudishen, in their jurisdiction. The outlined process consisted of five steps, including propaganda and launching, thorough investigation, sweeping and regulation, wrap up and evaluation, and consolidation and improvement.

The project was carried out in February and March. In just 26 days, 5,911 temples were razed. Most of the temples were small. The land, which has been reclaimed, will be used for tree planting if it is in the countryside or for the construction of public places in urban areas, authorities have said.

In Taoism, Tudishen is a lower-ranked god who shares an intimate relationship with people. Chinese Taoists revere Tudishen as a provider of blessings, wealth, safety, and harvest and often pray to the deity to receive these things.

A woman named Zhang Ling, who lives in Gaoyou, said local government officials deter people from engaging in folk religion events, saying that they are trying to transform social traditions.

The last social upheaval to destroy this many Tudishen temples took place during China’s Cultural Revolution, when then-Chairman Mao Zedong encouraged the Red Guards, a nationwide group of militant young people, to attack old customs, culture, habits, and ideas, collectively known as the Four Olds. As a result, places of worship tied to ancient Chinese culture were often targeted for destruction.