Lawyers Freed Ahead of Visits 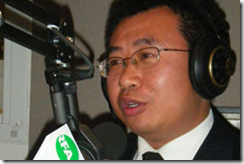 Beijing-based lawyer Jiang Tianyong returned home on Tuesday, his wife, Jin Bianling, said.
“He’s back,” Jin said, at around 7:30 p.m. local time on Tuesday.  “He has just got home.”
She added: “He has lost a lot of weight.”
But she declined to comment further. “It’s not convenient for me to talk any more,” Jin said.
U.S. officials have raised Jiang’s case with Beijing, urging them to stop the “extra-legal” detention of lawyers and activists, which has intensified in recent weeks following online calls for a “Jasmine” revolution inspired by events in the Middle East.
His release came ahead of a three-day trip to China by a group of 10 U.S. senators.
The delegation, one of the largest and most senior to visit China, is scheduled to hold talks on trade and finance with top Chinese officials.
Novelist resurfaces
Meanwhile, Australian Prime Minister Julia Gillard will meet President Hu Jintao on Wednesday, after urging Beijing not to take “backward steps” on human rights.
Gillard’s week-long trip will take in key trading partners China, Japan, and South Korea.
Australian spy novelist and blogger Yang Hengjun was feared to have been caught up in the anti-dissent crackdown after he disappeared briefly last month in unusual circumstances in southern China.
Yang, a former Chinese diplomat and now prominent online commentator, vanished after telling a colleague he was being followed by three men, but resurfaced within days, insisting it was all a “misunderstanding.”
The Chinese Human Rights Defenders website has published details of 18 other lawyers, activists, and dissidents who are missing, though other groups have identified more than 50 in total.
The second rights lawyer, Liu Xiaoyuan, who disappeared last week, was released following questioning by police about his civil rights activities and cases he had defended.
Liu said he told police he was a friend of detained artist Ai Weiwei, and was willing to defend him. But he said the police had drawn no link between his detention and Ai’s investigation for “economic crimes.”
Meanwhile, Beijing public interest lawyer Liu Anjun said he was taken away on a “holiday” to the southern island province of Hainan by Fengtai district national security police.
“They said we were just going for a little walk,” Liu said. “I told them right from the start I didn’t want to go anywhere … but in the end I didn’t hold out, because I didn’t want to suffer physical harm.”
“I don’t really know why they wanted me to come here,” he said. “I’m really not sure about that.”
Nationwide crackdown
In the southern province of Guangzhou, a number of activists, including lawyer Tang Jingling, independent commentator Ye Du, and Liu Shijun hadn’t been heard of for several days, relatives said.
Tang’s wife Wang Yanfang also disappeared, shortly after receiving a notification of his detention on subversion charges in March, friends and fellow activists said at the time.
A similar fate befell Ye’s wife Wan Haitao in the same month.
Zhongshan University professor Ai Xiaoming, who is currently taking care of her elderly father in Wuhan, said she had had no news of that group of friends.
“When I was in Guangzhou I hadn’t heard from those guys in a long time,” she said. “The last time I saw them was when I met them for a meal back in March.”
“I haven’t seen them since.”
Hubei-based Web writer Liu Mianming said the crackdown appeared to extend nationwide.
“It’s very serious,” he said. “A lot of people are under surveillance or detention.”
Calls to prominent rights lawyer Teng Biao, who has been missing for two months, went unanswered on Tuesday.
Reported by Qiao Long for RFA’s Mandarin service. Translated and written in English by Luisetta Mudie.
Copyright © 1998-2011 Radio Free Asia. All rights reserved.
http://www.rfa.org/english/news/china/lawyers-04202011120723.html