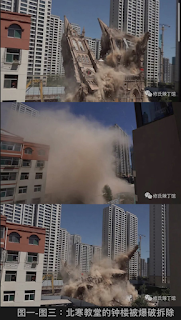 (Shanxi, China —September 13, 2022) – The Gothic-style cathedral of the Beihan Catholic Church of the Catholic Diocese of Taiyuan has been demolished by local authorities as a direct result of a new urban area development project by the government. On August 25, the Diocese of Taiyuan’s Beihan Catholic Church complex was torn down first, and the remaining 40-meter-high bell tower was blasted in a coordinated demolition.

Around 2016-2017, the Taiyuan Municipal Government planned a systematic organization and architectural renovation of Beihan Village, where the Beihan Catholic Church is located, into a new city with shopping, theater, culture, leisure, and tourism. On June 1, 2018, Taiyuan Wanbailin District Government and the Beihan Community jointly signed the cooperation agreement for the Beihan Village Renovation Project. The new city will be developed by China Overseas and Investment Ltd., the largest property developer in China. The whole village will be demolished and transformed into a large integrated city.

On August 21, 2018, photos of the scenes of the new city’s renovation of Beihan Village in Taiyuan City became public; the buildings around the church had all been demolished, but the church was not destroyed; it stood tall and plunged into the clouds, this Gothic style Catholic Church was isolated in the middle of a ruin, with a bird’s eye view like an isolated island in the middle of an oasis. At the time, some of the tenants who were facing relocation expressed:

“It is still Big brother Jesus that has the biggest face, our houses are all torn down, and big brother’s house still remains.” (Translators note: Face here refers to reputation, pride, and honor.)

Later, a video taken by a church member showed that the buildings around the Beihan Catholic Church had been renovated, but the church complex remained. This magnificent Gothic-style cathedral complex stood out in the new city. Perhaps the diocese was under tremendous pressure to protect the church from demolition.

Unfortunately, the eventual fall of this church indicates the abdication of religious authority to political powers in China. The superficial prosperity of the new city and the modern political and economic structure of the new city can no longer accommodate it.

Catholicism has been in the village of Beihan for nearly 200 years. In addition to Catholicism, a large number of Protestant missionaries from the ministered in Shanxi, but during significant persecution in 1900, the publications of the China Inland Mission, a Protestant missionary organization, recorded that between 15,000 and 20,000 local believers were killed on the Protestant side in northern Shanxi Province alone. There were also Catholic Franciscan bishops, friars, and nuns killed.

After missionaries from the west had to leave China after the establishment of the Chinese Communist Party, the daughter of a Swedish missionary who left China and still speaks the Shanxi language fluently in her later years posted a video on April 11, 2018, reminiscing about her childhood in Shanxi.

The church, which faces south, is about 50 meters long and 20 meters wide, with a bell tower of about 40 meters high and a cruciform plan, typical of the Gothic style, and its architecture seems to be modeled after the Notre Dame Cathedral in Paris.

Some netizens negatively commented on this local government’s act of demolishing churches, saying, “It has been planned to be demolished in 2018, the process started this year, the acts of suppressing freedom of faith is the great gift of the twenty (the 20th National Congress of the Chinese Communist Party).”

The demolition of the Beihan Catholic Church is one of the few cases in the world of cathedral bombing in Shanxi province, following the province’s 2017 bombing of the Christian Golden Lampstand Cathedral in Linfen City.

China Overseas and Investment Ltd. said the church would be rebuilt off-site according to the new plan, but the details are unknown and unconfirmed by the Catholic Diocese of Taiyuan. The Catholic Church in Beihan has not issued an official statement, so there must be a reason for this, causing concerns that the freedom of the clergy has been curtailed.