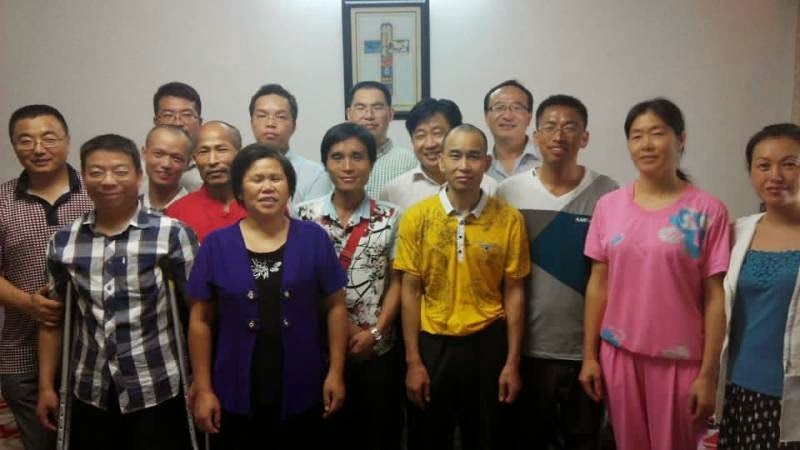 
(Shaoyang, Hunan—Sept. 4, 2014) Authorities last week in China’s central Hunan folded under pressure from the local community and lawyers and released 12 Christians, who were criminally detained on Aug. 7, on bail pending trial.

After the Aug. 7 detention of a dozen Christians from four different counties in Shaoyang, close to 20 human rights lawyers, many of whom are Christians, arrived in Shaoyang to provide legal services. The lawyers went with the detainees’ family members to the respective public security bureaus to negotiate with officials, accusing local police of abusing their power and perpetuating religious persecution through groundless charges, family members told China Aid.

The lawyers also told police that if they continue to willfully arrest Christians who participate in normal religious activities and have a normal faith, the police and prosecutor will be the jokes of the court systems, and they could face criminal lawsuits brought by victims and their families.

Also released on Aug. 22 were two Christians who had been criminally detained: Fan Tianying and Li Fenge from the Dongkou Public Security Bureau. Both of the latter two were released on bail pending trial; Fan’s bail was 8,000 yuan (US $1,300) and Li’s bail was 10,000 yuan (US $1,630). On Aug. 23, the Longhui County Public Security Bureau released Hu Tousheng after a 10,000-yuan bail was paid.

While the believers have been granted bail, authorities have frozen the assets at the Dongkou County church as well as church members’ personal accounts. “The church assets are worth more than 300,000 yuan (US $48,900),” one worshipper said. “Personal assets and non-church assets worth tens of thousands are also frozen.”

Local believers are also reporting that they are afraid to attend any religious gatherings. “The [authorities] don’t allow the church’s worshippers to gather together, saying that our house church is not certified. They say we can gather together, but it must be at a Three-Self church,” a man named Ning said.

All together, there should be more than 10,000 worshippers in these counties,” Ning said. “Now, they can only get together in threes or fives. The electricity for the worshippers was cut, and the eldest worshipper is 81. From Aug. 22 until [Sept. 2], more than a week has passed, and they have spent nights in darkness. The [authorities] say they will solve the power problem as soon as possible, but the worshippers must not gather there.”

“There is minor persecution on gatherings of small groups,” a Christian woman named Yu said. “They simply brand us whatever they can think of and call us an evil cult when they really should conduct an investigation before they say so. I think gatherings in small groups may not be so bad. They may even stimulate the growth of the church.”

Persecution against house churches has increased recently, and it is widely speculated that the increase is related to the brutal murder of a woman at a McDonald’s restaurant in Zhaoyuan, Shandong, by members of the Church of the Almighty God, which the Chinese government has deemed a cult, after the woman refused to give the group her phone number for recruitment purposes.