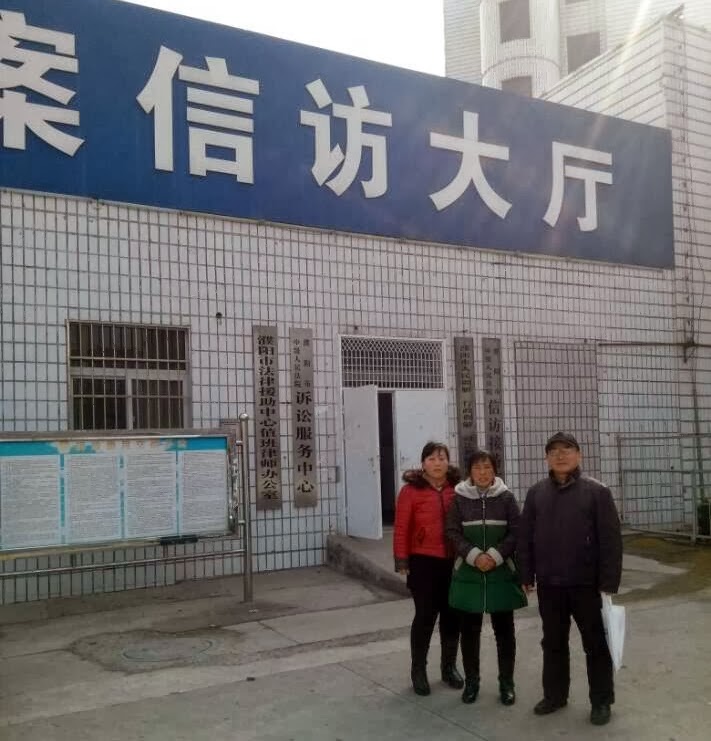 The believers, Li Cairen, Zhao Guoli and Wu Guishan, were moved from the original detention facility to an unknown location during the night of Feb. 15 or early morning of Feb. 16 (see https://chinaaid.org/2014/02/three-nanle-county-christian-confirmed.html and https://chinaaid.org/2014/02/missing-nanle-county-christian-meets.html).

Family members of the missing detainees tried to file missing persons reports with the Puyang Municipal Public Security Bureau; however, authorities there repeatedly told the families that the case wasn’t a disappearance.

This time, believers attempted to file a nonfeasance suit against the Nanle County Public Security Bureau at both the Nanle County Court and the Puyang Municpal Court on Friday. Both requests were denied.

“As the court in Nanle refused to file a case for us, we went to Puyang. There, they also said they can’t file a case for us. They said our case was ‘lecturing’ and that lecturing should expire in three months. I asked why they had not released the detainees [who have been detained since mid-November], and they said there was no way they could control that,” Li Bianling, wife of Zhao Guoli, said. (For information on the initial detainment and the identity of the detainees see https://chinaaid.org/2013/11/update-three-self-sanctioned-church.html and https://chinaaid.org/2014/01/exclusive-identity-of-12-detained-nanle.html, respectively.)

Zhang “Yunyun” Huixin, the elder daughter of Pastor Zhang Shaojie, said that two women received the believers at Puyang Municipal Court. “After an employee there looked at our indictment, which asks why the detainees have not been released now that three months of ‘lecturing’ passed, I asked her whether lecturing is legal now that she had admitted there is lecturing in Henan.”

“She immediately became angry and asked me who I am and wanted me to show her my ID. I asked for her ID and asked why she was not wearing the badge issued by the court. She immediately changed her tone and said she was in court to ‘get something done,’” Yunyun said.

“I asked why, if she was in court to get something done, she had read our indictment, why she called elsewhere to inquire [about the case] and why she stood behind the window of the office. Then she became vicious and yelled at me and said I was not a client and not qualified to talk with her.”

Yunyun said she believes the court didn’t accept the lawsuit was because they were afraid of repercussions. “They didn’t anticipate the great pressure from the public opinion and the large numbers of people who pay attention to this matter. They are afraid that our people will make their crimes public.”

Threatening Call
Zhang Shaojie’s younger daughter, Zhang “Shanshan” Lingxin said that the believers received a threatening phone call after their visit to the courts. “A caller called at about 1 p.m. this afternoon and said we are stirring up trouble again. He said ‘You’d better be quiet now and don’t look for trouble.’”

Shanshan said the man knew that the Christians had visited the court and told them that “they” would never let the church members petition higher authorities again. Shanshan said she believes the call was a response to the threat posed by the potential suit, which would open Nanle County officials up to prosecution for operating illegal detention centers. It is unclear who received the phone call.

Henan officials investigate
Following the CCTV report exposing black jails in six cities across Henan, the Commission for Political and Legal Affairs and the Bureau for Letters and Calls said that “such an act is not in line with legal stipulations” and vowed to investigate and shut down illegal detention centers across the province.

Additionally, on Feb. 19, a group of 31 lawyers from 12 provinces, autonomous regions and municipalities applied at the provincial level for free and open information, questioned authorities about the results of the proposed investigation and suggested that a serious investigation of those who violated laws and regulations by maintaining the black jails be pursued.

ChinaAid will continue to monitor this situation. We ask that the Christian community pray for the three missing believers as well as the six who are detained in legal detention centers.