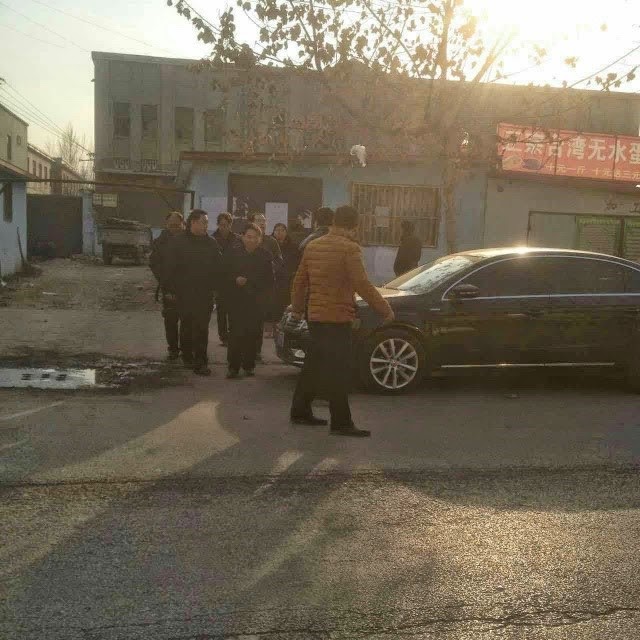 (Nanle County, Henan—Dec. 19, 2014) The cross topping Nanle County Christian Church in China’s central Henan province was removed during the early morning yesterday, and the church’s entrances were sealed. This most recent bout of persecution comes just weeks after local authorities withdrew around 4 million Yuan (US $643,000) from the church’s bank account; meanwhile, the appeal for two church members sentenced to 1-1/2 years and one year in prison was upheld.

Church members learned early Thursday morning that the church’s cross had been removed during the night and attempted to gather at the church. However, several hundred officers blocked access to the building.

“Many people from the government came to the gate of the church,” said Zhang “Shanshan” Lingxin, the younger daughter of Nanle County Christian Church’s imprisoned pastor Zhang Shaojie. “In fact, all the work units in the county were mobilized. At the scene, there were special police officers, armed security agents, and around 120 ambulances just in case physical fights happened. Since they didn’t have the official paperwork to seal the building, they simply blocked the gates [with] bricks.”

Shanshan said a public notice issued by the Nanle County Religious Affairs Bureau and three other government departments stated that the church building, a repurposed theater, posed serious safety issues and that, in order to protect the believers, the local Three-Self Patriotic Movement had rented a repurposed refrigerator factory for future activities. Authorities have made similar claims since as early as December 2013.

“If they call [the church] a dangerous building, they should demolish it immediately. However, they dare not demolish it because they don’t have the official paperwork. Therefore, they’ve blocked the gates with bricks,” Shanshan said.

The pastor’s daughter said that in the future, church members will use smaller facilities in various places throughout the county.

“Our money was taken away by the religious affairs bureau,” Shanshan said. “This is illegal because they didn’t have my father’s signature or seal [of approval]. They did it without our approval and without the approval of the people from the Chinese Christian Congress and Three-Self Patriotic Movement. They withdrew the funds without giving us notice. We only got a notice from the bank because our accounts are linked with the cell phone number.

“The worshippers saved this money over a period of many years…to build a new church,” she said.

Nanle County Christian Church members also learned that the Sept. 9 verdict sentencing Zhang Cuijuan and Zhao Junling to 1-1/2 years and one year in prison, respectively, was upheld in the trial of second instance on Dec. 9. Time served will count towards the Christians’ sentences.

Family members said there was no court session held for the decision; Zhao, his lawyers and Zhang Cuijuan’s lawyers received phone calls on Dec. 9, telling them to come to the Nanle County People’s Court later that afternoon to hear the decision.

Jia Liming, Zhang Cuijuan’s husband, told China Aid that he tried to visit his wife the next day, but wasn’t allowed to see her.

“She may be [in the process of being] transferred to another prison, and they may let me see her in the future. Right now, I don’t know where she will be transferred. She still has five months to serve,” Jia said.

Additionally, Shanshan said there was no news yet on her father’s petition against his 12-year sentence and that she intended to visit him today.