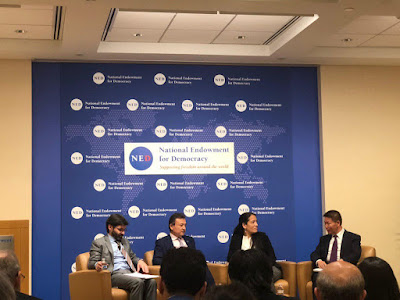 National Endowment for Democracy hosts panels ahead of Tiananmen anniversary

Sophie Richardson from the Human Rights Watch, Xiao Qiang from the China Digital Times, and Ttcat, a tech activist, comprised the second panel, called “Resisting the Spread of China’s Repressive Tactics and Technologies.”

The NED held these panels in advance of tomorrow’s 30th anniversary of the Tiananmen Square Massacre, commemorating one of China’s most notorious abuses of human rights. On the night of June 3 and throughout June 4, 1989, Chinese authorities brutally slaughtered innocent pro-democracy student activists who had gathered in Beijing’s Tiananmen Square to demand increased freedoms, also killing bystanders in the process. Since then, China has tried to silence news of the mass murders, preventing media coverage within its own borders.