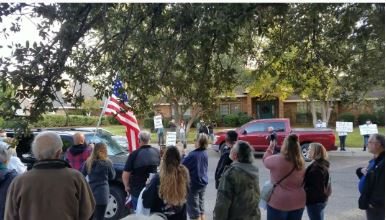 Neighbors and others show support for Pastor Bob Fu; taking stand against protesters’ slander [part 1 of 3]

“You have the right to remain silent….”

Using those words which introduce the Miranda Warning, also known as being “Mirandized,” according to legal guidelines, a law enforcement officer must clearly and directly inform or remind a person they have a right, a choice, whether to speak up or be silent. They also have a right to attorney representation when charged with breaking the law. As the Miranda Warning states:

In addition to the right to “remain silent,” you also have the right to speak up or protest about things you consider important. Only “with a few notable exceptions, nobody can restrict your rights simply because they don’t like what you say.”

Sunday morning, in front of Pastor Bob Fu’s house, two diverse groups demonstrated both sides of “the right to remain silent.” On one side of the street, homeowners and supporters of Pastor Fu gathered to pray for him as he has entered protective custody due to death threats and his home being besieged by protestors.

The protestors gathered on the other side of the street, in Midland, Texas, and linked to Guo Wengui, a Chinese billionaire who resides in New York. Guo has launched and fueled a disinformation campaign targeting Pastor Fu, founder of China Aid, the underground church leader who escaped China in the mid-1990s. He employs the protestors.

Susan, Wendy, Jenny, Conrad, Stephen, Celia, Teri, another neighbor, and Eliel, individuals supporting Pastor Fu, forfeited their “right to remain silent” to encourage others to prayerfully stand up and speak up for what’s right, to honor God.

We cannot walk down the street without cameras being shoved right in our faces. Protesters are saying they will not leave until Bob meets with them. [Law enforcement, including FBI, however, voided this due to threats.]

The protesters make themselves unidentifiable because by wearing jackets, hats, jeans, masks, and sunglasses. I understand that a protestor receives a bonus if he or she engages in a verbal altercation or confrontation or if police arrest them. Recently, when a group of protestors followed my 13-year-old son and his 12-year-old cousin down the block, they kept putting the cameras in their faces.

Wendy, not a neighbor but interested in freedom and liberty:

I found out about protestors at Bob’s house on Facebook. One friend, Jenny, had posted that we need to teach kids about America’s heritage: about our freedom. She requested for patriots to come support Bob. At times, when our group stood in front of Bob’s house and sang worship songs, protestors started yelling things about Bob I know are not true.       I believe that if someone has a true grievance against Bob or anyone else, there’s probably a better way to address it.

From what I see happening now, I know that what we read in the Bible is becoming a reality.These people do not know Bob Fu.

When the protestors first began their daily siege of the sidewalks, they were waving the Chinese flag. Now, they wave the American Flag. Now, they look like they have gone to Goodwill to buy clothes and look like us.Now, no end to the protests appears to be in sight. Protestors are saying they will be here as long as needed. Some have even told their families they may not return; that they are willing to die for this cause against Pastor Fu.Protestors have not only falsely accused Bob of being a Chinese Communist Party [CCP] spy and committing horrendous crimes; they have made death and bomb threats against him and his family. Brian Carnet, a local lawyer, pays for protestors’ bonds when police arrest them.Enough is enough.