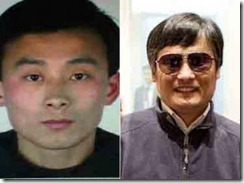 (Linyi, Shandong–Nov. 30, 2012) The nephew of blind legal activist Chen Guangcheng was sentenced Friday to more than three years in prison for causing “intentional injury” to a policeman who was part of a dragnet searching for his uncle, whose dramatic escape from illegal house arrest captured world attention this spring.

The Yinan County court in Shandong province sentenced Chen’s nephew, Chen Kegui, at 2 p.m. Friday to three years and three months for “intentionally causing injury.” Chen Guangcheng, who now lives in New York City, telephoned ChinaAid founder and president Bob Fu in the middle of the night, U.S. time, with the news and to express his outrage. (Note: county’s name corrected on Dec. 10, 2012)

The court found that Chen Kegui had surrendered at the scene, but did not accept his legitimate defense that he was acting in self-defense. Chen Kegui said at the trial that he would not appeal.

Chen Kegui’s family had received no formal notifications whatsoever about the criminal proceedings.  His father, Chen Guangfu, only heard about the scheduled trial on Friday morning, when Chen Kegui’s lawyer, Wang Tao, called with the news.

When Chen Guangfu arrived at the courthouse, he was immediately deprived of his freedom of movement and told explicitly that he could only enter the courtroom as a witness.  When Chen Guangfu refused, he was prevented by police from observing the proceedings.  One of Chen Kegui’s uncles was the one who was in the courtroom to hear the verdict and sentence.

Chen Kegui was arrested in May 2012. Prosecutors found that when police stormed into the Chen family home in the middle of the night to search for Chen Guangcheng, Chen Kegui had used a knife and attacked them, injuring at least one policeman.  The authorities had wanted to charge Chen Kegui with homicide, but later changed it to “intentional injury.”

ChinaAid’s Bob Fu expressed shock and outrage at this outcome, saying, “The illegal arrest, secret trial and sentencing of Chen Kegui today represents a dark day of China’s legal system. This clearly is an act of revenge against the blind self-taught lawyer Chen Guangcheng, who escaped from house arrest in April.”

“Chen Kegui did nothing but exercise his lawful right to self defense when he was attacked and almost killed in his own home by government-hired thugs,” Fu said. “This case shows that the new Chinese leadership continues to disregard the rule of law and the basic rights of its citizens. Given that this is such a high-profile case, today’s events also show the leadership’s contempt for the wishes of the entire international community.”

ChinaAid hopes that before the new leadership under Xi Jinping takes over the reins of power next March it can resolutely abandon the ultra-leftist road of the regime under Hu Jintao and Wen Jiabao, overturn Chen’s conviction and restore freedom to this innocent young man.

ChinaAid will continue to support Chen Kegui and follow closely the developments in his case, as well as continue to work for his freedom and compensation for damages and injury.