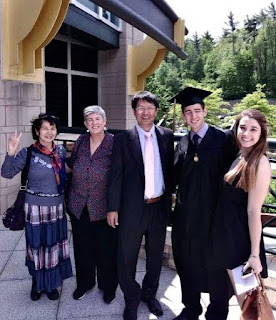 Newest letter from John Cao lists his hopes after prison

(Kunming, Yunnan province—March 11, 2022) Recently, Pastor John Cao wrote another letter to his mother Sun Jinhuan, telling her his vision about his life after serving his sentence. He revealed his strong faith and optimism for the future. In his previous letter, he explained that his name “Sanqiang” (three strengths) means “strong inmate, strong preacher, and strong school founder.”

Pastor John Cao’s Chinese name is Sanqiang Cao, and Sanqiang means three strengths. He said in his recent letter that he hoped after his release to be a “three-without” person:  without sin, without private property, and without self:

I hope that I will not commit any sin from the day I am to be released (or jailed) to the end of my life. Confucius achieved this goal in his 70s. (“At seventy, I can follow my heart’s desire, without transgressing what is right”). Without private property means that I will donate all my wealth.

In addition, I hope to have “three joys”: enjoy following the Holy Spirit, enjoy reading books, and enjoy making friends.

Also, I hope to have “three loves”: Love Jesus, love enemies, and love everyone.

Furthermore, I hope to have “three courages”: be brave to fight against evil, to testify of God, and to explore new things and areas.

Finally, I hope to have “three fors”: sacrifice for the church, pave the road for new believers, and write a new chapter for history.

“Write a new chapter for history” means that I will write a few books, Chinese hold the belief that a nobleman should do three things: to set one’s meritorious, to set one’s virtue, to expound one’s ideas in writing.

I never thought about expounding my ideas in writing because there are plenty of books and even overwhelming books in bookstores, what can I write about? After the 7-year reflection, I believe that I can write a few good-quality books.

Pastor John Cao said to his mother at the end of the letter, “See, I am still jailed, but I have been visioning the ‘post-imprisonment’ life, which gives me joy.”

March 5 was the 5th anniversary of Pastor John Cao’s incarceration. He proclaimed the gospel in the impoverished areas along the border between China and Myanmar, provided financial aid, and established schools. He tirelessly traveled between Yunnan, China, and Wa, Myanmar, to establish 16 schools. In his travels, he brought children textbooks, pencils, and Bibles, which benefited over 2,000 local students. In March 2017, he came back to Yunnan from Myanmar but was intercepted by border patrol officers. A year later, he was sentenced to 7 years on a charge of “organizing illegal border crossings” by a local court in Yunnan. This conviction usually involves human trafficking.

The letter mailed by Pastor John Cao conveys that 5-year imprisonment did not strip him of his determination nor cut down his faith in God. These testimonies tremendously encourage both his 86-year-old mother and other Christians.