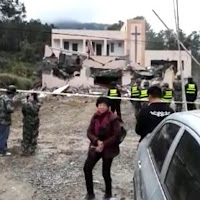 On the morning of Dec. 18, the nuns living at St. Theresa Convent received an eviction notice, and that night, authorities arrived on the scene with numerous police cars, explosion-proof vehicles, and ambulances. They dispatched demolition personnel to the convent at 11:00 p.m. and ordered all of the nuns to evacuate within the hour. They then began to demolish window frames and doors.

During the process, bishops, priests, and church members continuously tried to negotiate with the authorities, and the nuns sent a message urging people to pray and distributed a video showing the demolition’s progression. They also successfully pled with the authorities to spare the sanctuary.

While the church is not a government-approved church, its bishop, Wei Jingyi, has been awaiting ordination with the Chinese government as an official church leader. In China, in order to be considered a legal religious establishment, groups must register with the Chinese government and submit to its oversight and censorship, and clergy must be trained and ordained by the state in order to be considered legitimate. Those who choose to remain separate from the government to avoid its interference often face persecution.

Those who attend the church affiliated with the convent suspect that authorities destroyed the church to put pressure on congregations that do not register with the government.

After the convent’s demolition, the nuns were homeless for a while. In Qiqihar, winter temperatures are often cold, prompting the parishioners to worry. However, Wei announced that the women have found another place to live.

Since the Vatican and the Chinese government reached a temporary agreement intended to allow them to jointly appoint clergy and thereby mend their decades-long severed relationship, the Communist Party has accelerated its persecution of Catholics who do not worship at government-run churches, many of whom have chosen to do so in order to remain loyal to the Vatican.