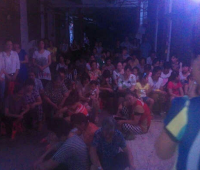 When authorities learned that Jiang Junying, a member of the persecuted Zhongfu Tongxin Church in Shantou, was on a sidewalk distributing Gospel leaflets to passersby on Feb. 8, they dispatched local public security bureau officers to detain her and confiscate her handouts. Taking her to the local police station, they interrogated her for several hours.

“They asked her many things, such as where she got the leaflets and who asked her to distribute them,” said Guo, a woman who attends the church. “They let her stand there, but, in the end, there was no way for the police station [to get any information from her]. They held her for one afternoon. While people were having lunch, she just stood there and prayed. Later on, the police let her go.”

Previously, the public security bureau pressured individual church members to join the Three-Self Patriotic Movement (TSPM), China’s government-run church. After they repeatedly refused, authorities sealed the church building on Aug. 18, claiming that the church members used the building to illegally practice religion. Guo petitioned at the provincial government building. Afterwards, officials removed the seals, installed cameras over the church’s entrance, and coerced the landlord to terminate their rental contract, forcing them to move to another location.

China Aid exposes abuses such as those experienced by Jiang Junying and the Christians attending Zhongfu Tongxin Church in order to promote religious freedom and rule of law in China.