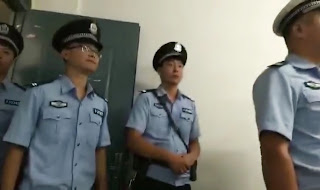 (Zhumadian, Henan—Aug. 16, 2018) More than 20 policemen and religious affairs bureau officials from China’s central Henan province broke into a church service last Sunday, harassing and taking away many of the Christians gathered there.

More than 20 Christians were attending the morning gathering in Zhumadian, Henan, when the agents intruded on the servie.

“Some were undercover cops, and others wore a uniform,” one Christian said. “They snapped pictures while bursting in. Then, they cut off the service.”


Another one of the attendees told ChinaAid, “They attempted to grab Sister Sang’s iPad and cell phone without showing their IDs. Sister Sang said, ‘This is my personal stuff.’ They ignored her and continued to seize our stuff. Brother Qian witnessed this and took over the iPad and cell phone. Officers immediately targeted Brother Qian, and he was immediately under their control because he did not resist.”

Qian was later taken away.

One of the church members also noted that the law enforcement “were not civil and humane during their work,” even pushing a woman to the ground and subsequently knocking a child off of a chair.

After the raid, many of the congregants were taken to the Xiyuan Police Station, where Sang asked Lü Guang, the associate director of the religious affairs bureau, and Yicheng District Religious Affairs Bureau Director Hou, “What crime did we commit? Why did you take away our friends?”

However, Lü stopped her from continuing and forced every one of the Christians to register their information. In response, Sang said, “We are Chinese citizens and have freedom of religion. Why do you keep track of our personal information?” Outraged, Lü asked undercover police to take her away.

For more than three hours, the Christians were forced to remain at the station with authorities telling them they had religious freedom, but must submit to the government’s management and meet at approved venues. In China, all religious venues must be registered with the government and comply with official censorship in order to be considered legal, violating Article 36 of the Chinese Constitution, which stipulates that no government body may interfere with a citizen’s religious life. As a result, the Christians stood up for their rights, chanting “freedom of belief,” but they were seized by the police.

Later, some of the Christians revealed that the government had also threatened to have them fired from their occupations, saying, “Our jobs, lives, and even security are all affected severely.

ChinaAid exposes the abuses suffered by these Henan Christians in order to stand against the government’s mistreatment of China’s religious citizens and promote religious freedom, human rights, and rule of law.