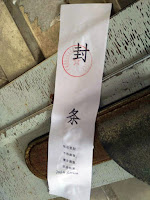 (Guangzhou, Guangdong—July 15, 2016) Officials in China’s southern Guangdong province shut down and sealed one branch of a house church on June 23, threatening to take action if the church continued meeting.

This incident marks the fourth incursion against the Taihe County branch of Guangfu Church, also known as Taihe Hall, this year. Government officials from the local Public Security Comprehensive Management Commission placed a seal over the doors to Taihe Hall and cut off power and water to the building.

The official reason for the closure was that the landlord of the building did not have the proper certificates. In previous official actions against the church, members reported that officials frequently pressured the landlord to terminate their ten-year contract prematurely and evict the church. The head of Guangfu Church, a man named Mark, took the contract out two years ago, and has spent approximately 500,000 Yuan (U.S. $75,000) refurbishing the location.

Another Guangfu Church branch in the Baiyun District of Guangzhou experienced a slew of persecution over the last year, facing evictions, raids, threats and other forms of pressure from authorities. Now the Taihe branch faces similar challenges from their local authorities.

“I want to tell them that they have to use their power according to proper procedures, even if we have actually violated laws,” Mark said. “We will not only refuse to follow orders, but also sue officers if they don’t do things the right way.”

China Aid reports on instances of persecution such as the unlawful treatment of the branches of Guangfu Church in order to expose abuses by the Chinese government against Christian citizens and promote religious freedom and rule of law.