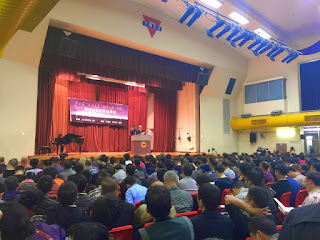 Wang Yi, the pastor of Autumn Rain Blessing Church, was taken from his home on Sept. 26 and charged with “picking quarrels and provoking troubles.” The police also planned to detain his wife, Jiang Rong, but had not yet obtained the proper legal documents. After 3:00 p.m. on the same day, she was not able to be reached by phone, and some church members found the house empty, causing them to speculate that the authorities had obtained the appropriate documentation and detained her.

Later that day, Wang sent the following message to his supporters: “Many thanks to the brothers and sisters (in Christ). I was [forced to go to the police station] today and have returned home. The Lord’s grace was with me. I wish that both God’s church and God’s children can be blessed with peace and security.”

On Sept. 12, officials intercepted Wang as he was attempting to travel to a Christian conference, entitled the Three-Folds Vision Training Conference, in Hong Kong, where he had been invited to speak. He was detained at the police station for one hour and then allowed to return home. Jiang, however, was allowed to travel to Hong Kong and read aloud a letter from Wang.

ChinaAid reports abuses, such as those experienced by Wang Yi and Jiang Rong, in order to stand in solidarity with persecuted Christians and promote religious freedom, human rights, and rule of law.