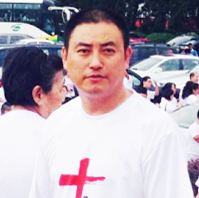 (Wenzhou, Zhejiang—Oct. 20, 2017) As Chinese officials cracked down on religion and dissent ahead of the 19th National Party Congress of the Communist Party of China, a missionary and pastor issued a prayer letter on Oct. 13, crying out against the constant harassment he and his family have experienced.

Even though missionary and pastor Yan Xiaojie has maintained a low profile since being released in February 2016, he wrote a letter on Oct. 13 asking for prayer due to continuous government persecution. In the letter, he writes, “What kind of crime did I commit? In this period, Wenzhou authorities keep harassing me, asking me to report to the police station every day and coming to my home daily. They seriously disturb my family’s life—especially that of my two elderly [parents]—my life, and my work.”

He also wrote, “In the end, I don’t know why [they harass me]? … [In 2015], they captured me for no reason, and I was shut for half a year in a small, black room. Inside, I was constantly hurt and attacked. I have not exposed them to the world, because they do not allow me to tell about the things that happened inside the prison. I have not yet started to protest and complain … Do we Chinese people have human rights at all?”

The Wenzhou Municipal Public Security Bureau placed Yan in administrative custody on Aug. 26, 2015, after he opposed a government-led cross demolition campaign ravaging Zhejiang province. He was released for a one-year “qubao houshen,” which is a bail-like period in which a trial is pending and the freed individuals are at the whims of the officials, in February 2016. Despite the one-year period expiring in February 2017, he has continued to face government harassment.

When a ChinaAid reporter called Yan, he discovered that his phone had been turned off.

Another pastor in Wenzhou, Zhejiang told the reporter that the police’s constant trips to Yan’s house made his parents “very nervous.”

According to one Christian, the recent gathering of the 19th National Party Congress led the authorities to tighten their controls over Christians in Wenzhou.

ChinaAid exposes abuses, such as those experienced by Yan and church members in Wenzhou, in order to stand in solidarity with persecuted Christians and promote religious freedom, human rights, and rule of law.