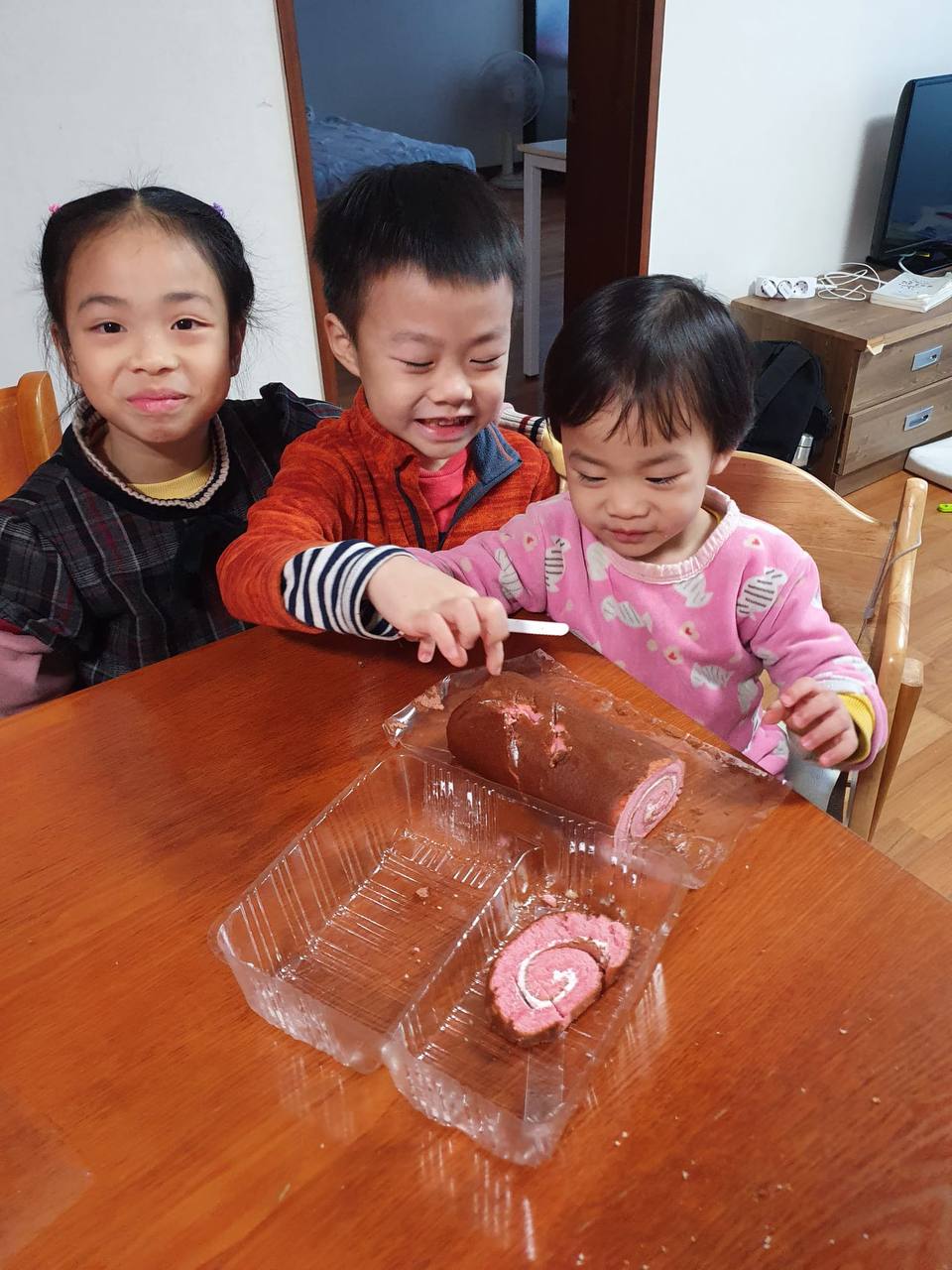 Pilgrim’s Progress: When the virus looks ferocious, we fix our eyes on God’s smiling face

Jeju’s confirmed cases in the past three weeks spiked from a few dozen to the current over 2,000 cases. The government’s COVID policy is to co-exist with the virus, and we know that we will get infected eventually. As we proactively prepare for that day, we are a little worried about one of the kids—Eve. She is the only one among us who has an underlying condition, she battled severe pneumonia; severe pulmonary effusion; and scarlet fever three years ago.

All 60 of us live in one hotel, and each family has their own private room. Children have a place for activities and worship, so we do not interact with others much.

Three days ago, one kid had a fever, so we did a rapid test. We got a negative result, and the symptoms disappeared after a while.

Yesterday, two kids had mild symptoms; but Eve had a fever, the result of the rapid test was positive, so we took her to the hospital.  Today, the report issued by the hospital confirms that Eve has COVID.  Our worst fears have arrived, and the virus has shown its ugly face to us! Three years ago, we witnessed God’s smiling face with Eve’s fight against illnesses. Eve’s father sent this letter about the works of God, which is written below:

“The Person God Loves is Sick!”

Eve, a 4-year-old kid, has been sick since July 25, 2018. My family walked through the valley of the shadow of death and have witnessed the Lord’s presence because of her illness. Meanwhile, her illness makes everyone who knows us worried.

In October 2013, I got married, and the pastor encouraged us to multiply in our wedding.

In September 2016, God granted us a son, and we named him Wen Gehua.

In July 2015, I responded to God’s calling to work full time as the administrative secretary at the church and Timothy School. It is God’s enormous grace that allowed me to join the ministry. I am so delighted to see children grow up by receiving Christian classical education. Although my family does not have abundant resources, we have gained a lot spiritually. I joyfully brought my wife and children to church every Sunday. Eve once said, “Dad, hurry up, you should unlock the door.” Eve gradually learned how to pray and sing hymns and asked Dad to tell her a Bible story before going to bed. Life is busy, satisfying, and happy. Eve often asked, “Dad, when can I go to school?”

In early April, my wife was pregnant again. Brothers and sisters in Christ all said that we should call her Wen Rou if it were a girl. My wife had a miscarriage in late May, and my family felt so sad. We lost him/her before we got to know the sex. The Lord gave, and the Lord has taken away; blessed be the name of the Lord. Jehovah is sovereign in every life. My wife recovered gradually, and we felt better mentally. However, Eve was sick at that time.

Eve was usually healthy. She occasionally caught a cold but healed a few days after taking medication. Nevertheless, it was different this time. Eve had a fever that day, so we took her to the hospital. The doctor’s diagnosis was a cold, and they found that she was allergic to antibiotics. Her illness became worse after a few days of medical treatment. We brought her to Nanshan Hospital, and she was diagnosed with severe pneumonia; severe pulmonary effusion; and scarlet fever. Her health deteriorated after two days of treatment. On July 29, she was transferred to Shenzhen Children’s Hospital and sent to the ICU. The doctor notified us that she was in a critical situation.

Some of us sat at the entrance of the ICU, facing the closed door, visioning how doctors strived to save Eve and realizing that we might lose her. My wife asked me, “Our third child just went to the Lord, will God let Eve die?” I was wordless and could not hold back tears. I knew my child’s life was in God’s hands. I wish I could hear the Lord Jesus say, “Girl, I command you to rise!”

During the period, the elders of the church asked the congregation to fast and pray for Eve. In the meantime, they asked the congregation to raise funds for Eve’s medical expenses. Neither my wife nor I have social security welfare, our kids do not have children’s medical insurance, I do not have savings while working at the school. Thank the Lord, the church raised over 50,000 yuan (US$7,924) for Eve’s medical expenses. Brothers and sisters all journeyed with us at that time, supporting us, interceding for us. What is most touching and comforting to me is the line brothers and sisters wrote to me, “Our life is tied with the kid’s life!”

Eve was out of critical condition after staying in ICU for three days. She was conscious but had difficulty speaking due to shortness of breath. Our visit was only 10 minutes that day, and the pastor and I came in and visited her. She saw us, grinning reluctantly and whispering, “Dad.” The pastor said, “Eve, I ask you questions, and you just need to nod or shake your head, okay?” Eve nodded. “Eve, were you baptized? Are you a lamb belonging to the Lord Jesus?” She thought for a bit and nodded. “Eve, will you take the Holy Communion like big brothers and sisters when you grow up?” She smiled and nodded. The pastor prayed, saying, “Lord, Eve is your lamb, her life is in your hands.”

Yes, Eve was certain that her body and spirit belong to our faithful Lord Jesus Christ, no matter if she was alive or dead. The pastor made this confirmed to us, which comforted us enormously.

Eve was transferred to the isolation ward 11 days later following the series of medical treatments in the ICU, including the Department of Cardiothoracic Surgery opening her lungs for intubation drainage. Afterward, her fever lasted a long time, pulmonary abscess happened again, and the doctors opened her lungs for intubation drainage again. God arranged the best doctors for Eve at the Children’s Hospital, and nurses gifted her many toys. Brothers and sisters interceded, supported, and cared for us, which makes us see the Lord’s presence and have the stamina to walk through the valley of the shadow of death.

On August 28, Eve was released from the hospital after staying there for over a month. Doctors said that she should be on medication and needed rest. The thick medical report shows the great work of health care workers; the medical expense, over 80,000 yuan (US$12,675), was paid off thanks to donations from fellow believers. I held my weak daughter in my arms, feeling the thick grace and care, and my heart was full. It seemed that the kid came back to life— she was lost and found again.

Eve had a follow-up checkup at the Children’s Hospital on September 5, and doctors said that she almost healed.

However, Eve had a fever, coughed, and shortness of breath again on September 8.

On September 10, we brought Eve to the Seventh Affiliated Hospital at Sun Yat-sen University and scheduled an appointment with a specialist. The doctor said after checking her that she should be admitted to the hospital and receive medical treatment immediately. She was diagnosed with pneumonectomies, pneumothorax, and recurrent infection. That evening, the Seventh Affiliated Hospital organized a group of specialists to produce a medical treatment plan for her.

The joy and peace we had when Eve was released from the hospital were robbed. I asked, “Lord, what is your will?” Brothers and sisters came to the hospital and prayed for us, lifting us up in their love. Students from the school told me, “Teacher Wen, Eve’s illness will not end in death. No, it is for God’s glory.”

Eve got better after a few days of treatment. It would take a long time and a lot of money to cure her illnesses.

While my family faces medical expenses, fellow congregants of the church give us a lot of support, care, and love. I am posting this article in the hope that you all will help us again. If you feel led by the Spirit of God and have surplus money, we will receive it with gratitude. We may not know each other, I may neither deserve nor be able to do anything in return, but God remembers your love and sees what is done in secret, and rewards you. If you are having financial difficulties, do not push yourself nor give yourself a hard time. Please just pray for us because the prayer of a righteous person is powerful and effective.

If this sickness does not end in death, I will teach Eve using the surgery scars on her body. God’s grace was so powerfully at work in her when she was 4 years old. May the scars on Eve’s body be the signs of God’s grace on her and remind her that she is the Lord’s beloved!

Many people helped the family after the letter was sent out. God’s hand touched Eve and she healed quickly, which is shocking to her doctors. The surgery scars on her body became the signs of God’s grace. Later, we left China together and came to Jeju. Brother Wen’s family expanded by having another girl, who is the first kid among us born in Jeju.

Today, Eve got COVID, and a few kids have mid symptoms.

We quarantine at home, complying with the hospital’s COVID rules.

We have stockpiled enough test kits, medication, and sufficient food.

We are reminded that we should help each other, and the Mayflower puritans witnessed God’s smiling face in the new Plymouth disaster when the healthy took care of the sick. God said, “I will never leave you nor forsake you.”

“Many, Lord, are asking, ‘Who will bring us prosperity?’ Let the light of your face on us. Fill my heart with joy when their grain and new wine abound. In peace I will lie down and sleep, for you alone, Lord, make me dwell in safety.” (Psalms 4: 6-8)

(Translator note: since the translating of this article, Eve and the other children have recovered from COVID)