(Shandong and Xinjiang, Sept 19, 2012) At 4pm on September 14, 2012, Pastor Bike (Zhang Mingxuan), Chairman of China House Church Alliance, and 17 co-workers from Yunnan, Jiangxi, Anhui, Jiangsu and South Korea, began distributing gospel tracts at the train station of Dezhou city, Shandong Province.  Twenty minutes later, police from the police station of Decheng District took them away for interrogation.  The police expressly forbid them from proclaiming the gospel and distributing tracts, citing “illegal evangelism,” and confiscated the remaining Gospel-related materials.  At last, by 7:50pm, the Pastor and co-workers had been released from custody and left Dezhou.  The police threatened they would be detained if they returned to engage in “illegal evangelism.”

On September 16, 2012 (in the afternoon), a Christian rights defense lawyer met with house church pastor Zhong Shuguang and other church coworkers in Xinjiang Hotan who have been persecuted by the local police station since March 2012, and ga 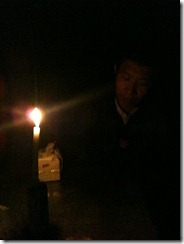 ve them a brief training on legal proceedings and defense of religious rights.  After dinner, the rights defense lawyer went to Pastor Zhong Shuguang’s home and found it was in pitch darkness.  Zhong Shuguang explained that since July of this year, the township government had shut off the electric supply to his home, and his family had to rely on candles for light at night.  He also said that the local government did not allow house church believers to gather, and would seize believers whenever they gathered together; gatherings of all sizes had been banned, large or small.  The local government also said that this was a result of the “special situation of Xinjiang,” and that there was nothing they could do, and this would not change.

(Refer to relevant reports at https://chinaaid.org/2012/08/xinjiang-hotan-house-church-suffers.html )

China Aid Association contends that the distribution of gospel tracts by Pastor Zhang Mingxuan and others is an exercise of basic religious freedom and cannot be condemned as “illegal.” We do not understand why the distribution of commercial and political and even prostitution tracts, in public places such as wide streets, narrow lanes and bus/train stations in China, enjoy more freedom than distribution of gospel tract.  Furthermore, ChinaAid expresses indignant and condemnation for the prolonged unlawful persecution of Pastor Zhong Shuguang by Xinjiang Hotan authorities, and the extended retaliation to his family. The so-called “special situation” of Xinjiang is an open secret, and what does it have to do with Christian church and believers?  The practice of the Xinjiang authorities that deceives themselves as well as others will lead to nothing but worse failures.

Lord Jesus Christ said, “I have come to bring fire on the earth, and how I wish it were already kindled!” (Luke 12:49)  The two millennia of church history have amply proven that the fire of God’s Truth cannot be quenched.  The harder it is suppressed, the brighter it burns.  The candlelight from the gospel that has been kindled will surely brighten the dark night of Xinjiang.