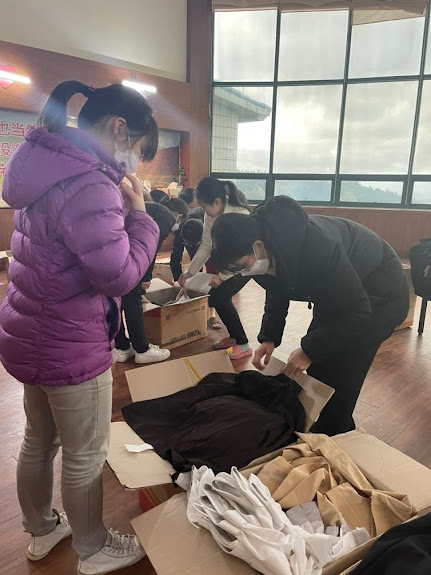 (Jeju Island, South Korea—May 2, 2022) Many of the men of the Mayflower
Church have updated ChinaAid on the struggles of adapting to life outside of China.
Recently, however, several women sent updates regarding their journey in a
foreign country. The first update by Xiurong Chen celebrates how Mayflower members
gathered during their “Christmas Thanksgiving” last year. Jingjing Chen, a
mother, wrote the second update, recalling how the initial living situation was
challenging for everyone.

Christmas Day, December 25,
2021, is also the day that God has given us all kinds of grace for thanksgiving,
gatherings, and dinners since our church came to Jeju Island for refuge two
years ago.

Today
happened to be a Saturday, and I told the children that there would be gifts at
10:00 a.m., a party at 3:00 p.m., and a dinner in the evening, so it would be a
very busy and joyful day. So, the kids woke up early and rushed to do their
homework before they had breakfast.

The
kids were happy, and I was looking forward to the day’s program as much as they
were. Although this was not the first time I received gifts or had a meal, I
had indescribable, joyful anticipation in my heart. I enjoyed our time together,
the atmosphere, and the feeling of being on earth as if I were in heaven.

I arrived at the church before
10:00, and there were pastors and six lovely girls from the schoolhouse serving
inside. The girls were organizing and preparing things in the church, waiting
for everyone to come and receive their gifts. I like to take pictures of them,
so I arrived early. I wanted to leave them serving, and I felt that every shot
left God’s blessing to us.

At 10:00, brothers and sisters
arrived at the church one by one. There was a big pile of clothes, both new and
old, which were gifts of love from other churches, and we didn’t mind them at
all.

The children were also happy
to receive various delicious gifts from other churches. Some of the churches
were very concerned about us when they heard about our arrival in Korea, and
since we have been here, our church has not been lacking and God has been
gracious to us through different channels.

In the afternoon, each family shared
something they were thankful for during our meeting, and I took videos and
pictures of them as they shared. There were tears, laughter, repentance, and
thanksgiving. It was rich, like a beautiful flower made up of petals, with a
strange fragrance that is memorable.

When it was our turn, I was
very grateful and excited. I thought of my two adopted children: my daughter
Wonderful and my son Chine. During the hardest time, I complained that God had
given me such a big burden, saying that I only wanted two children, but He gave
me four. Others said that I was so poor that I could not feed four children.

After I came to the Shenzhen Holy
Reformed, the pastor loved children very much and often encouraged brothers and
sisters to have many children. Especially when my children were able to attend school
and learn God’s word from a young age. I deeply realized that this is not our
burden as a couple, but God’s work. He wants to use us as a couple to help our
two children build their own lives.

I have experienced a lot during these years of hardship with my
children, and I have learned very deeply that people really have no goodness in
themselves, but if you concentrate on praying and asking the God of love, you
will slowly gain the power of love. I used to think I was a very gentle and
loving person, but now I feel very ashamed that I can have a little bit of love
because of God. Whenever I read about goodness because of God, I am deeply
moved.

I am also thankful that we are
still free to worship God and study God’s word here in Korea. I think of my
brothers and sisters in China, although it is Christmas, they cannot meet as in
previous years because of the Chinese boycott and the epidemic. After we left
China, the persecution grew, many churches could not meet, schools were
dispersed, and even on Sundays churches could not meet normally. Just in the
past two days, several groups of brothers and sisters in my WeChat group have
been dispersed, all because of the persecution. I am sad for the situation of
brothers and sisters in China; I also thank the Lord for leading us out, if we
had not left China, the schoolhouse might have been gone, and the children
would not have been able to study God’s word anymore.

I am also very thankful that
our family has not stopped family worship during these two years, and we have
been reading the Bible and praying together every day.

When I was
in Shenzhen, my husband worked late at work, and although we had family
worship, I mostly took the kids, but now in Korea, we get off work around 5 pm
and we spend the evenings together as a family, which is the most beautiful
time to be together as a family. Although it’s harder to work over here, it’s
much better than before, and my Lord is thankful to treat our family.

When we came to Korea, our
youngest son was only two and a half years old, the two girls were four and a
half years old, and our oldest son was over seven years old. After we arrived
in Korea in October 2019, there was an epidemic outbreak in China that affected
the whole world, and Korea was also affected. During the Chinese New Year in
2020, we stayed home during the school holidays, and the children were not
allowed to go to school, so we started to take the children to read the Bible,
especially the two girls, and thought it was the best way to recognize words.
We didn’t have any special way to teach our children, but we just wanted them
to read the Bible well and remember God’s word so that it would be a blessing
to them throughout their lives. Reading the Bible with our children was a
little difficult at first, but they were very obedient. I thank the
Lord that the children learned quickly and were able to read on their own. On
January 1, 2020, all of us at church started to read the
Bible together.

I thank my Lord
for letting us live in His will and plan, and we enjoy the joy and blessings in
it. There is always no end of gratitude to share because every day is full of
the Lord’s grace and nothing but gratitude!

The Gust
of Wind When My Mayflower Set Sail

In
their hearts, humans plan their course, but the LORD establishes his steps.
(Proverbs 16:9 ESV)

On
October 22, 2019, my family of four arrived in Jeju Island, South Korea, where
I was unfamiliar. I never thought I would go abroad before because I always thought
it would be good to live in China where I was born, and how could I live in a
country where I don’t know the language? So, I never thought of going abroad, and
I did not get a passport.

When
we came to Korea without a place to live, we lived with the Luo Guangying
sisters, who arrived in Jeju two weeks before us. Where we lived was found for
us by a brother who had lived in Korea for many years. That landlord only gave
us a place to stay until the end of October.

It
is hard for me to forget that night of October 31, 2019. That night the
landlord asked us to move out of the house we were living in immediately, but
we didn’t know where to go. We could not find a house.

The
other brothers and sisters lived far away from us, and many people were living
there too. Sister Luo Guangying was still pregnant at that time, seven months along
with twins, dragging her luggage with her. I was holding an eight-month-old
child who could not walk yet and carrying a five-year-old child from my family,
dragging my luggage.

One
of our husbands went to look for a house, and the other went to look for a car.
We are two sisters with a few children walking on the road without any idea
where to go. We did not know where we would sleep that night until we found a
bus stop bench. I said, “There is no place to live, this bus stop may allow us
to spend the night.” Although it could not block the wind, it kept us dry.

It
was late at night, and finally, there was a place to stay. My family lived with
two other families, a two-room house with three families living in it. And Luo
Guangying went to live in Pastor Pan’s house. At that time, six families were
living in Pastor Pan’s house, because they had just arrived and had no place to
live, so they had to squeeze in together.

Later,
some brothers and sisters came. We could not find a house at once because of
the language barrier and our unfamiliarity with Korea. We only found three
houses, all with two bedrooms and one bathroom, and a dozen of our families
lived in these three houses. We all ate at the same table.

Later,
when all the brothers and sisters found houses and lived separately, they
slowly began to live normally.

“The
world was not worthy of them. They wandered in deserts and mountains, living in
caves and in holes in the ground. (Hebrews 11:38)

Our
Mayflower predecessors 400 years ago drifted without determination. That wind
blew them off course but blew them into God’s intended destination. And my
church and my home set sail, and we became heavenly travelers.

ChinaAid exposes abuses to stand in solidarity with the persecuted and promote religious freedom, human rights, and rule of law. If you wish to partner with us in helping those persecuted by the Chinese government, please click the button below to make a charitable donation.