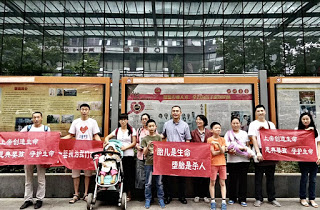 Authorities have summoned Minister Wu multiple times since last year for continuing to serve ERCC. At times, police officers detained him at their station for nearly 24 hours. Although Chinese Communist Party (CCP) officials have intensified pressure on Minister Wu, and persecuted him in various ways, he refuses to give in and deny his Christian faith.

Last autumn, authorities shut off the water and electricity at Minister Wu’s residence multiple times. Several times, early in May this year, unknown individuals deflated the tires on his car and even punctured them to the point they could not be repaired.

Since June 04, CCP authorities chained the only exit to downstairs—the door of the fire escape outside Minister Wu’s home. Officials had assigned up to four unidentified people to monitor Minister Wu and his wife from outside their apartment. The monitors did not reveal their identities, nevertheless, they illegally restricted Minister Wu and his wife’s freedom, locking them inside their home and refusing to let them leave.

As CCP authorities kept Minister Wu and his wife imprisoned in their apartment, this severely affected them. They not only had to order drinking water, vegetables, and food, they asked ERCC Brothers and Sisters living close to deliver other necessities to their door.

Even though Minister Wu’s wife suddenly became ill on the evening of June 04, CCP monitors prohibited her and Minister Wu from going out to purchase medicine. ERCC Brothers and Sisters came by and slipped medicine under the door.

The CCP monitors did not leave their post until July 5.

On July 15, in Pingchang, the hometown of Cheng Xiangqi, another ERCC congregant, police ordered that he serve a 15-day detention sentence for posting a poem on WeChat that suggested the CCP should confess their sins and turn to Jesus.

Using a common practice of shutting off a resident’s water, electricity, and gas, police officers regularly convince landlords to force Christians to move. After Jia Xuewei, another Christian Brother, had lived in his new rental place for only a month, officials threatened his landlord to ultimately evict Brother Jia from his place.

At the time the reporter issued the news story, no update regarding Minister Wu had become available.

###
just as it is right for me to think this of you all,
because I have you in my heart,
inasmuch as both in my chains
and in the defense and confirmation of the gospel,
you all are partakers with me of grace.