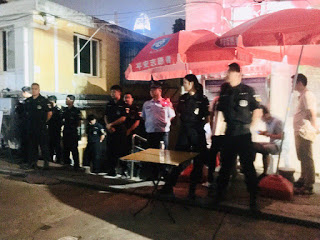 (Xiamen, Fujian—July 6, 2019) Police and security officials staked out the location of Xunsiding Church for at least a month after the house of worship was shut down in May.

The wife of Xunsiding Church’s pastor brought friends to the church’s location on June 30. A large group of police and other officials formed a human wall to prevent entry and exit.

According to reports, the human wall of officials occurred for at least a month after police arrived at the location on May 31.

Pastor Yang Xibo posted video of his wife questioning police about why they were at the location even though the church was shut down. The wife asked why friends could not come to the venue for dinner.

According to reports, one officer said only family could enter, stay, and live in the building and it could not be used for religious events. Police also say they maintain the right to check IDs of each person who enters.

Pastor Yang’s wife criticized police action as “simple and rude and not based on laws.”

Reports say the local ethnic and religious affairs bureau issued a penalty on Xunsiding Church on May 18. Authorities broke in the next day for inspection. Worship was halted as the shutdown notice was posted along with a fine of 250,000 Chinese Yuan (roughly $36,330 USD).

Pastor Yang refused to give in, issuing an appeal on May 20 for a hearing. A hearing occurred on May 31 in Siming District, but authorities officially shut down the church in the evening after prohibiting entry.

According to reports, the bureau claims church property was “established as a venue for religious events without authorization” and needed to be closed in accordance with law.