China Aid Association
(Wenzhou–May 20, 2013) Police in the vibrant Christian city of Wenzhou raided a house church called Bethany House last Friday prohibiting it from holding a seminar that evening with a Canadian theology professor as the guest lecturer. 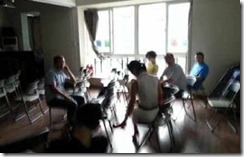 The seminar, which was to be conducted entirely in English, was to be on “The Philosophy of Christianity and Scholastic Philosophy.”  Local sources estimated that in all of Wenzhou, which is believed to have the largest Christian population of any city in China, no more than an estimated 100 believers are fluent enough in English to have understood the lecture.

(The blurred figure wearing black in the photo is a Domestic Security Protection agent.)

Nonetheless, on Friday afternoon, about 20 officials from the neighborhood committee, the police station and the Domestic Security Protection Squad showed up at the leased venue on a “joint enforcement” mission.  Some were in uniform, others were not.  No one showed any identification, but on the pretext of conducting a fire inspection and checking for proper registration, they notified the landlord that there were problems with failure to meet the fire code, with the weight bearing wall and with the lease.  After church lay leaders patiently explained everything, one impatient official said, in a slip of the tongue, “Foreigners are not allowed to come here and lecture.”

During the raid, some law enforcement officers stubbed out cigarette butts on the wood floors and threw out cups that they had drunk wherever they pleased.  A Domestic Security Protection agent surnamed Jin verbally threatened some of the lay leaders.

When another believer started to take photographs, someone who said he was from the neighborhood committee told the man that he was not allowed to take photographs and that the pictures could not be posted on the Internet.  Another lay leader said that this person who claimed to be from the neighborhood committee was in fact a Domestic Security Protection agent.

Only when the government officials all were satisfied that the seminar would not take place did they leave.

Later in the afternoon, at about 5:20 p.m., one lay leader was invited “to have tea”– a euphemism for being called in unofficially for questioning.  He was not allowed to leave until 7 p.m., when it was confirmed that the seminar did not take place at the leased venue.  One Domestic Security Protection agent said that the lay leader could have been held for eight hours.

ChinaAid expresses its grave concern over the steadily increasing and ever-expanding occurrences of persecution against Christians.  Reality is causing a rude awakening of the ambitious but untenable idea of “the Chinese dream.”