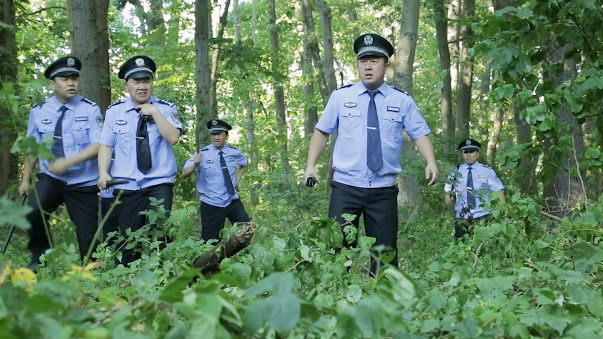 Illustrative reminder that CCP police search off and online for religious infractions.
(Photo: Flickr)
(Sichuan, Province; Shandong Province; Beijing —Jan. 16, 2021) At approximately 7 am on January 14, police officers, school district officials, and urban management officers raided the home of Liang Huali and Shu Qiong, his wife, and confiscated numerous personal possessions. At the time, Mr. Liang and Ms. Shu, Christians who attend Chengdu Early Rain Covenant Church (Sichuan Province), were guiding their children in their studies.
In other legal maneuvers targeting freedom of religion in Sichuan, as well as in Beijing, and in some other areas, the Christian Council and the Committee of the Three-Self Patriotic Movement of the Protestant Churches sent official notices to ban all religious activities during the 2021 Chinese New Year.

On January 8, in Shandong, the Christian Council and the Committee of the Three-Self Patriotic Movement of the Protestant Churches issued a “Notice on prevention and control of covid-19 pandemic during 2021 Chinese New Year” to all local offices throughout the province. According to the notice, multiple covid-19 cases, including some asymptomatic cases, had been confirmed in Hebei and Liaoning provinces. As some affected individuals had attended religious gatherings in Hebei province (approximately 170 miles away), therefore authorities require all local Christian Councils and local Committees of the Three-Self Patriotic Movement of the Protestant Churches to strictly conform to local health department’s pandemic prevention and control regulations. Officials must thoroughly investigate all believers and determine who have relatives living in Hebei province and other pandemic hot spots. They must also submit a list of ministers who closely interacted with people with covid-19, and report details. Authorities prohibit any believers not from the local area to attend any religious activity.

The notice also advises that religious venues must reduce the number of people attending religious gatherings as much as possible, and refrain from hosting large-scale religious gatherings during the Chinese New Year. Dedicated personnel must be on duty at all times to ensure the enforcement of the regulations and guarantee the safety of believers and ministers.

A pastor from a church in Qingdao, Shandong Province said: “The local Three-self church received the notice to stop all religious activities during the Chinese New Year. The notice directs us to stop gathering from now until after the Chinese New Year but did not specify a date to resume.”

Officials in Xingtai (a city in Hebei Province) issued a notice for authorities to temporarily stop all religious activities and close all religious venues.

Since early January, CCP authorities have closed 155 religious’ venues in Beijing, claiming that newly emerged confirmed covid-19 cases relate to believers’ evangelical events.
Pastor Zhang, who serves a church in Tongzhou District, Beijing, said: “Many Three-self churches in Beijing also received the notice. In addition to banning all services in the church, Chinese Communist Party (CCP) authorities also offer a reward to people who report house church gatherings. Due to the pandemic, many house churches have not gathered as usual, but host online services. Internet police, however, monitor these activities.”

As CCP police increasingly implement legal maneuvers targeting freedom of religion off and online, however,  Christians like those who attend Chengdu Early Rain Covenant Church continue to guide their children.

###
Blessed are you when they revile and persecute you,
and say all kinds of evil against you falsely for My [Jesus] sake.
~ Matthew 5:11
China Aid exposes abuses in order to stand in solidarity with the persecuted and promote religious freedom, human rights, and rule of law. If you wish to partner with us in helping those persecuted by the Chinese government, please click the button below to make a charitable donation.