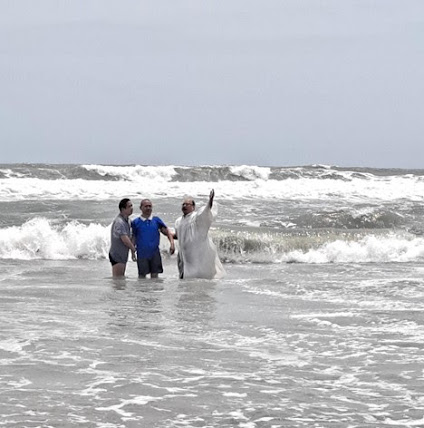 Police use COVID to harass Christians after baptism

(Shenzhen, Guangdong province—April 20, 2022) The day before Easter, Christians of Shenzhen Trinity Harvest Gospel Church drove for two hours to another city to baptize six believers on the beach. Local police harassed them afterward, however. The six believers completed several months of baptism classes, and nineteen co-workers of Shenzhen Trinity Harvest Gospel Church took turns to fast and pray for ten days for the baptism. Police harassment against Trinity Harvest has become commonplace after the incident regarding the church’s five-year anniversary last September.

Mao Zhibin, Trinity Harvest’s pastor, wrote about the church’s anniversary on his Facebook page. They drove to a beach in Huizhou on September 5, 2021, to celebrate, but some believers were tracked by police. A large group of police officers came and closed the beach. To avoid the same situation, they drove two hours on April 16 to a remote beach in another city to baptize believers. The baptism went well. However, someone posted the baptism pictures and videos to WeChat. Half an hour later when they had lunch, pastor Mao Zhibin received a phone call from the Management of Health Hotline (12320), asking him to verify his identity and confirm where he comes from in the name of COVID prevention. Several minutes later, a local county official and several police officers arrived at their restaurant. Under the excuse of COVID prevention, they checked their ID, scanned their COVID QR code, and performed a facial recognition scan. The police officers and staff were polite and waited until they finished their lunch. To pastor Mao’s surprise, a police officer already had the baptism videos on his cell phone. He was shocked by how fast the authorities responded.

Shenzhen Trinity Harvest Gospel Church is a young church established a little over five years ago, but it focuses heavily on social justice. Pastor Mao Zhibin and elder Shen Ling joined other ministers to support and sign Pastor Wang Yi’s “A Joint Statement by Pastors: A Declaration for the Sake of the Christian Faith.” The church has attracted a lot of dissidents and thus became a main target of persecution.

On April 25, 2021, at 10:30 am, police officers and officials of the Religious Affairs Bureau raided Shenzhen Trinity Harvest Gospel Church during its Sunday service. Pastor Mao Zhibin, pastor Cao Yuan, elder Chun Huaiqing, Wu Lixin, Ren Ming, Yue Yuan, and the other four Christians were taken to the police station. They did not show any legal documents or warrants. Pastor Mao Zhibin and pastor Cao Yuan challenged their illegal law enforcement, but they still took them to the police station by force.

In May 2021, the church planned to baptize several believers on the beach. But the government was aware of that and closed the beach ahead of time. So, they drove to Huizhou and completed the baptism successfully.

On July 11 at 10 am, Shenzhen Trinity Harvest Gospel Church was raided again during an online service. National security agents, police officers, and staff of the Religious Affairs Bureau broke into pastor Mao Zhibin and elder Chu Yanqing’s room and arrested them. They were preaching in a Zoom meeting when they were arrested. The service was forcibly terminated.

Since the church was banned in April 2021, believers were not able to fellowship together for about five months. They were longing to gather and worship. On September 5, 2021, which was the church’s fifth anniversary, they decided to bring their family and children to celebrate on the beach. Co-workers reserved a hotel online. However, their communication with the hotel staff was monitored. National security agents reached out to some Christians one day before the event and warned them not to attend.

At noon on September 4, 2021, many members of Trinity Harvest arrived at the beach in Huizhou to celebrate their fifth anniversary as a church. After lunch, they went to the hotel to check in, but they were not allowed to do so. According to the hotel staff, pastor Mao Zhibin, co-worker Mr. Liu, and other three Christians were on the local police station’s blacklist. They were not allowed to stay in any hotel.

Eventually, they were able to stay at a villa, but police barged in later that night to check IDs. They also forced those who did not bring IDs to find another place to stay. The proprietor allowed them to change to other rooms, but authorities summoned him to the local police station and interrogated him until 4 AM.

The next morning, the beach in Huizhou was full of police officers. Shenzhen police department and Huizhou police department mistakenly thought they were going to baptize believers on the beach and prepared accordingly. They talked to believers and warned them not to attend the event. They also mobilized forces to monitor believers.

Regarding the experience of April 16, 2022, pastor Mao Zhibin wrote:

As Christians, we get special attention from the government. When we eat lunch, a county official sits next to us and waits. As soon as they scanned our covid QR code and performed a facial recognition scan after lunch, many of my pictures appeared on the officer’s cell phone. It was truly impressive. I majored in Information Management at my university. With the data collected from WeChat and hundreds of millions of surveillance cameras and processed with artificial intelligence algorithms, the power is way beyond any other totalitarian regime. However, God is still in control. We just need to trust Him and follow him.” Pastor Mao is grateful for God’s grace. Everyone was afraid a massive lockdown will happen to Guangzhou and Shenzhen, just like what happened to Shanghai. But they were able to baptize four brothers and two sisters one day before Easter day. Although there was an accident during lunch, God is still leading and protecting their church to serve Him.