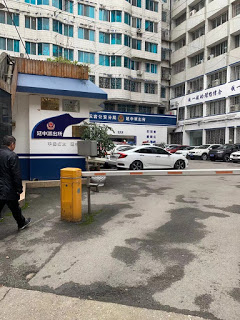 Li Lin, a congregant of ERCC, received a phone call from Guiyang Yanzhong Police Station around 11 am, asking her to come to the police station. In the past, Sister Li has been detained for three days, from March 16 to March 18, and summoned twice afterward. The church asks Christians to pray for Sister Lin. 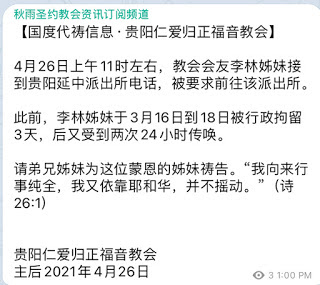 In May 2019, when police raided Ren’ai Reformed Church, Elder Zhang confronted an official of Bureau of Ethnic and Religious Affairs, “Today, you have offended God!” 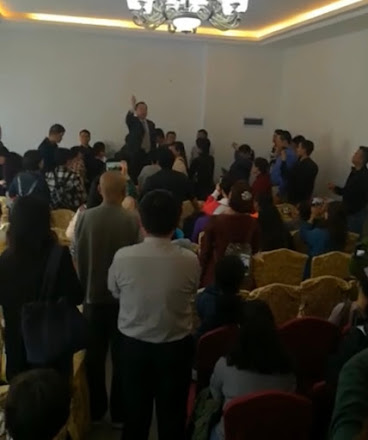 A week ago, Lawyer Sui Muqing, one of the lawyers Guiyang Ren’ai Reformed Church appointed for the church, arrived in Guiyang. He reported that when Christian Li Lin received the phone call from Yanzhong Police Station, the responding officer told her that the “request” was not a summon. However, it was in fact a summon officials issued in the name of “assisting an investigation.” At approximately 2:40 pm. after learning of the situation, Lawyer Sui Muqing, Yang Aiqing, and several church coworkers rushed to the police station. While there, as Zhang, an undercover police officer, checked Sister Li’s cell phone, Lawyer Sui questioned Officer Zhan regarding his action, something only supposed to be done with a summon. Documenting the illegal, act, Lawyer Sui also asked Officer Zhang for his name, in case he later filed a complaint.

Officer Zhang abruptly responded, identifying himself in a loud, rude tone. Police ultimately released Sister Li around 2 pm,
At approximately 4:30 pm, Li Jinzhi, police summoned another female, a congregant of Ren’ai Church. This made the third time since March 16 that Yanzhong Police summoned her to their station. Neither church members nor the reporter had yet received an update regarding whether authorities had released Sister Li Jinzhi at the time of this news.

Last month, on the morning of March 16, while congregants of Guiyang Ren’ai Reformed Church attending a “retreat” studied the Bible in a rental room in Yuli Plaza, Yunyan District, approximately 20 Chinese Communist Party (CCP) officials raided them. The authorities included personnel of “Bureau of Ethnic and Religious Affairs,” State security officers of Yunyan District Bureau of Public Security, and Yanzhong police. Officers illegally queried each person present, and and recorded each Christian’s ID. They transported more than 10 Christians, including Li Lin, and Li Jinzhi to the Yanzhong Police Station. There, they illegally interrogated the Christian detainees, and did not released them, even after interrogation.

About 5 pm, Zhang Chunlei, the elder of Ren’ai Reformed Evangelical Church, arrived at the police station to try to negotiate with “Bureau of Religious and Ethnic Affairs” officials. He asked authorities to release the detained Christians. Police officers, however, rudely refused to release them.

Afterward, authorities administratively detained Elder Zhang for 11 days, and another three congregants for three days. During the administrative detention, police illegally searched the homes of Elder Zhang, and the other detainees. They not only confiscated the hard discs of computers, the church’s baptismal record book, hymnals, and other property, but also refused to issue an inventory of the items they seized.

CCP authorities have held Elder Zhang under criminal detention on a charge of “fraud” even after he completed his administrative detention. Last week, police also detained Yang Aiqing, Elder Zhang’s wife, for 24 hours on a charge of “fraud.” When other congregants repeatedly asked authorities to issue a written decision of Elder Zhang’s administrative detention punishment, officials told the petitioners that they had mailed the notice. Nevertheless, police failed to provide a tracking number.

At the time of this report, multiple human rights lawyers had jointly filed a case to provide law assistance to Guiyang Ren’ai Reformed Church.

~ Yu Bing, ChinaAid Association Special Reporter
###
May the Lord answer you in the day of trouble;
May the name of the God of Jacob defend you;
~  Psalm 20:1 (NKJV)
China Aid exposes abuses in order to stand in solidarity with the persecuted and promote religious freedom, human rights, and rule of law. If you wish to partner with us in helping those persecuted by the Chinese government, please click the button below to make a charitable donation.